At White City House in Wood Lane, part of what used to be called ''the doughnut'', BBC Television Centre, the EFG London Jazz Festival launched last night. After a video aired online during the launch that featured festival artists and a short …

At White City House in Wood Lane, part of what used to be called ''the doughnut'', BBC Television Centre, the EFG London Jazz Festival launched last night. After a video aired online during the launch that featured festival artists and a short introductory speech by festival director Pelin Opcin in conversation with host Fusion joking about the need to be a ''jazz athlete'' to make as many gigs as possible, new band All Day Breakfast Cafe performed. 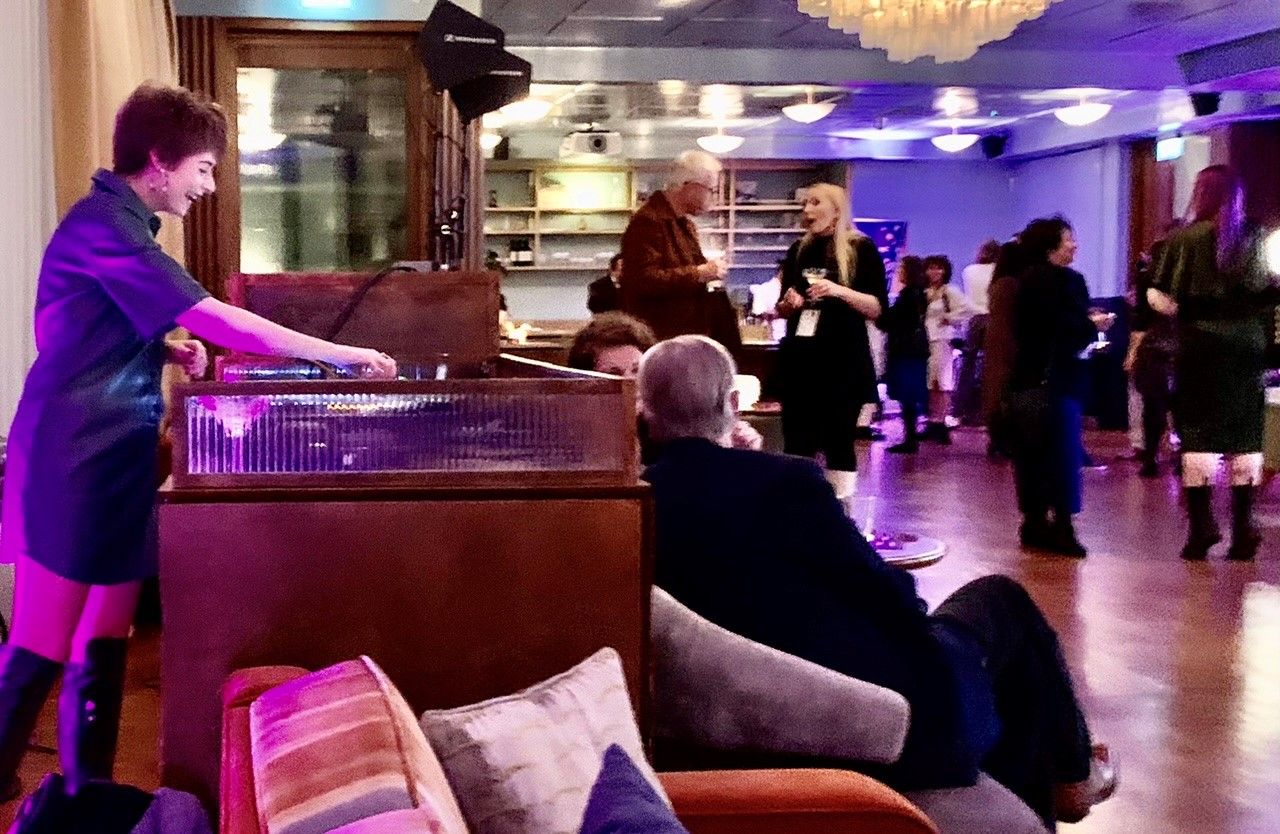 The DJ for the night was Tina Edwards, above

Attendees included Jazzwise writers Jane Cornwell, Peter Quinn and Selwyn Harris, Django Bates manager Jeremy Farnell, Martin Hummel of the Ubuntu record label, Chris Philips head of content for the Jazzed app, Ross Dines from the Pizza Express Jazz Club, Paul Pace from Ronnie Scott's, David Jones of Serious, looking forward to Yo La Tengo who appear at the LJF at the Royal Festival Hall on 19 November, and among many artists saxophonist Soweto Kinch and poet Anthony Joseph. Soweto is unveiling 'White Juju' with the London Symphony Orchestra conducted by Lee Reynolds at the Barbican also on the 19th.

The 7-piece all female disco and funk-influenced All Day Breakfast Cafe have a new EP out called Builder's Brew, which includes a cover of The Darkness classic 'I Believe in a Thing Called Love', and performed material from the release during their set. The band line-up on the EP is Loucin Moskofian, vocals; bass guitarist Amy Gadiaga; Jelly Cleaver, guitar; Kasia Konstance, flute; Beth Hopkins, saxophone; Lettie Leyland, trumpet; and Tash Keary, drums.

The Late, Late Show at Ronnie Scott's returned earlier this month after a long hiatus. Last night on a very rainy night in Soho punters sheltered in doorways as they queued to enter Ronnie's for the 11.15pm doors opening time. In this latest …

The Late, Late Show at Ronnie Scott's returned earlier this month after a long hiatus. Last night on a very rainy night in Soho punters sheltered in doorways as they queued to enter Ronnie's for the 11.15pm doors opening time. In this latest running the host was the trumpeter Matt Roberts and the theme was Prestige-period Miles Davis drawing on among other material the Cookin', Relaxin', Workin', Steamin' albums released between 1957 and 1961. With Roberts before the invited jammers joined was the flat-cap wearing Sam Watts on piano, Daisy George on double bass and the Empirical drummer Shane Forbes also wearing a flat cap early on and also like Watts bare-headed later. Beginning with 'Trane's Blues' from the Workin' album Roberts explaining that it's also known as 'Vierd Blues' a jokey reference to Blue Note founder Francis Wolff's strongly German accented description of it. Using a Harmon mute Roberts has an agile, ringing sound, a little reminiscent of the Belfast trumpeter Linley Hamilton, and this came through on 'If I Were a Bell' from Relaxin' Roberts asking the audience to listen out for the 'London Town' ''interjection.''

The host also mentioned how Miles wasn't known so much as a composer as a bandleader and sometimes compositions of his such as 'Half Nelson,' which was also on the set list, are overshadowed. Miles wrote the piece in 1947 when he was a member of Charlie Parker's quintet basing the piece on the chords of Tadd Dameron's 'Ladybird' we learned. The set also took in material from 1958 Columbia album Milestones, the Ahmad Jamal arrangement of traditional tune 'Billy Boy' and the Roberts quartet were dazzling here with Forbes counting-in more uptempo than the mooted count that Watts was indicating and this was the big highlight of the set, George firm as well marshalling the beat.

Forbes is a quite brilliant drummer and it was good to hear him here at Ronnie's after some years of not catching him live. His ride cymbal work especially was stimulating and drove the quartet. Standing by pianist Watts who also played very well Roberts amusingly noted when the sheet music fanned out that it was ''like a Bayeux tapestry''. Also in the set 'It Could Happen To You' and Benny Carter's 'When Lights are Low' which Miles recorded on the 1954 Prestige album Miles Davis Quartet with John Lewis, Percy Heath and Max Roach. 'The Theme' took us to the break. Afterwards jammers included tenorist Matt Anderson who played Sonny Rollins' 'Oleo' which as Roberts explained was a Sonny Rollins composition, the name associated with butter. Matt Roberts, top. Review and photos: Stephen Graham