Ana Gasteyer pulls off the near impossible

Here's a turn up for the books turning to the subject of the dreaded holiday season jazz record. There are quite a few sloshing about and most of them are awful. However, while I can't quite believe it is already high up in the Billboard jazz chart …

Here's a turn up for the books turning to the subject of the dreaded holiday season jazz record. There are quite a few sloshing about and most of them are awful. However, while I can't quite believe it is already high up in the Billboard jazz chart given that the calendar says it is only 9 November actor singer Ana Gasteyer has delivered a very swinging lively xmas album in Sugar & Booze full of jazz flavour and flair. The album includes original songs such as the title track written by Gasteyer and evergreens 'I've Got My Love to Keep Me Warm,' 'Have Yourself a Merry Little Christmas' and 'Let it Snow.' If you like Lea DeLaria's jazz output the chances are you will love this retro sparkler.

From 2016. Truly neighbourhood Hackney, train and tube stations are a brisk walk or cycle away, head past the Regent’s canal, the barges tied up, the giant gas holders dwarfing the hidden circling streets. Co-owned by Jack Abraham and reedist … 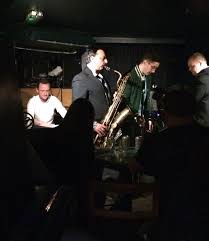 From 2016. Truly neighbourhood Hackney, train and tube stations are a brisk walk or cycle away, head past the Regent’s canal, the barges tied up, the giant gas holders dwarfing the hidden circling streets.

Co-owned by Jack Abraham and reedist Giacomo Smith, Kansas Smitty’s is approaching its first birthday this spring. Walk in from Broadway Market it’s a regular fairly trendy hipsterish bar on street level, take the stairs down, past the old tape-to-tape recorder placed there as design object the place is kitted out as a very small low-ceilinged jazz club with not a huge amount of circular tables in front of the stand, good sightlines, and clear-as-a-bell natural sound. At the back punters in the corner can lean against an upright piano with its lid down, a Wharfedale speaker propped on top. The toilets have ‘WC Fields’ signs on them.

Regular jazz nights include the Shed and Basement Tapes sessions, bop, mainstream and trad catered for among the styles, non-musical attractions include poker on offer and plenty of cocktails. You drink wine out of little tumblers. The bar has its house band based around a core of eight players.

With a low ceiling, green painted walls, bulbous lights fixed to the sides, the place pretty dark, a fragrant scent introduced via the air conditioning triggered by a multi-tasking Giacomo, vinyl spinning, the needle lifted and LPs flipped by bar manager Victoria, the place has an easy intimacy.

Playing on this latest running of the Basement Tapes were Alex Garnett on baritone sax, new straightahead guitar hero in the making the south-east London based Grant Green-influenced Artie Zaitz (Exodus), classy Velocity trio and Rebecca Ferguson accompanist Ross Stanley on Hammond B3, and Scott Hamilton drummer Steve Brown. Towards the end of the evening the Zaitz Basement Tapes combo were joined by alto saxophonist Rachael Cohen for a brief guest spot.

The quartet opened up with Garnett’s Golsonian homage ‘So Long’ followed by the flowing mellifluous strains of Dizzy Gillespie’s ‘Con Alma.’

As the set developed Zaitz quietly asserted himself in the ensemble interplay, tremendous facility as he power slid over the frets, sometimes octave-doubling, sometimes tickling the strings to tease out some new timbral effect, a rootsy downhome feel cultivated and encouraged, the blues never far away whether he was playing standing or preferring to sit, the guitar in his lap, picking out the harmonies tossed over from the Hammond that he simply needed and was compelled musically to respond to.

The fruity Ronnie Cuber-like personality and sound Garnett on number after number projected allowed for plenty of soul to seep out washed over by velvety glissy sweeps from Stanley while Brown kept very proper time. Zaitz had fun introducing ‘All the Things You Weren’t,’ and later the band soared into overdrive on ‘The Fox’ winning the room over in the second set with the infectious ‘Boogaloo Magoo’ written by Zaitz’s dad.

The inclusion of Neal Hefti’s ‘Lil Darlin’’ from The Atomic Mr Basie didn’t do much for me (it was glacially slow) although this step change applied the brakes successfully enough and a certain relief from the more uptempo numbers momentarily paving the way for the extra motion and skip provided by Rachael Cohen joining for the Afro-Cuban classic ‘Tin Tin Deo,’ Cohen harmonising neatly with Garnett.

The audience made their way into the London Fields night with the jaunty melody of Monk’s ‘Bye Ya’ in the air ringing out as much as to say from all the band and the convivial mood of the evening: now don’t be a stranger. Ross Stanley, above left, on Hammond organ; Alex Garnett; Smitty’s co-owner Giacomo Smith who announced the band; and Artie Zaitz. pic: marlbank