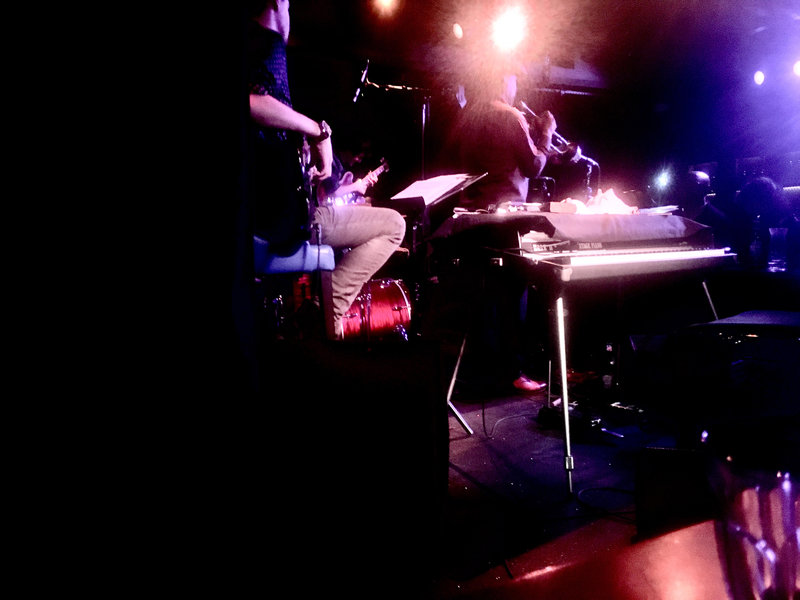 In quite a scramble because Soho was evacuated and police indicated a suspected World War two ordnance discovered at a building site near Dean Street where cordons were put in...

In quite a scramble because Soho was evacuated and police indicated a suspected World War two ordnance discovered at a building site near Dean Street where cordons were put in place Byron Wallen's show was moved from Soho a few miles across central London to the club's sister venue in the spacious basement club of the chain's Holborn restaurant.

The German-Italian-Hungarian quartet Web Web who were to play the whole evening ending up instead doing an opening support slot, Hungarian great Tony Lakatos on tenor saxophone and flute illuminating what was otherwise a fairly pedestrian Rhodes-soaked band sound. But fair play to the band for truncating their plans for the evening as they launched their latest record on the Compost label.

While the less than compelling support was not an ideal start to the evening the plus point was that Byron Wallen was able to make use of the Rhodes electric piano later. If it had been, as planned, Dean Street, the choice would have been the house Steinway. It was good to hear his arranger's touch when he sat down a few times to play the Rhodes ever so quietly and wisely given the cavalier way Web Web's pianist Roberto Di Gioia had tastelessly toyed with the volume dial.

4 Corners, Byron told the audience, has been playing together for three or four years and the place was packed with a lot of musicians in the audience as well as punters in what because of circumstances was a combined two-band audience. I chatted briefly to sax icon Jean Toussaint and Soul Immigrants leader guitarist Emrys Baird for instance in the break between sets among a range of luminaries present.

Rod Youngs on drums and Rob Luft on electric guitar toured a good deal last year with Dave O'Higgins and Scott Flanigan and have excellent rapport, Youngs powerful on the off beats and his bebop mastery of the bass drum certainly came into its own on the more syncopated sections for extra propulsion that Byron certainly responded to later particularly when he picked up blocks.

The tunes included the fine 'Silent Praise' and a tribute to Harry Beckett (1935-2010) called 'Pink' named after the door on an unnamed house on the Stoke Newington street that the great trumpeter advised Byron to look for when visiting him years ago. Byron said only a fellow trumpeter knows the challenge in keeping your playing chops in shape as Harry did.

The new Portrait material from Byron's first album in more than a decade had plenty of oomph and fizzed with ideas.

I liked the music he has written for Conundrum by Paul Anthony Morris to be staged at the Young Vic in May and whose director was present and the 'Womb to Tomb' passages were stuffed full of interest, the musical language moving beyond the Western conventions of rhythm and modality to evoke the spirit world. Byron's spoken word monologue was excellent, he has a very appealing voice and in his chats to the audience was warm and engaged talking about notions of home and how people from all over the world have contributed so much to life in Britain.

Luft played very well indeed, his tapping touch and measured use of reverb was visceral and highly direct. He managed to allow individuality to break out as well as knit into the rhythm section depending on the nature of the course of the tune. Paul Michael on bass guitar, sometimes sitting to play sometimes standing tall, was a reliable rock among the polyrhythmic undergrowth.

Byron's conch shell feature using pedal delay and capture that allowed him to use high pitched shells to be accompanied by the lower ranged sounds that he had moments earlier created really worked and integrated neatly when the solo flowed into band collective improvisation that then painted an expansive canvas.

The new Portrait material leans towards a neighbourhood story of Woolwich where Byron, who grew up in Tottenham, has lived for many years.

'Anthem' dedicated to Abram Wilson who left us too soon and who Byron stepped in for when the New Orleanian fell ill, was the most complete demonstration of Byron's mastery of mood and sectional shifts in the writing. The piece had an elaborate construction that unfolded and blossomed beautifully, Luft here was subtle and ingenious in the way he teased out the softer overtones he somehow found to nurture.

To sum up: the band played in a joyful engaged matter where improvisation had its place but composition did too, the tunes seemed bigger than themselves, and you could get the feeling that this was mature and original in an all-round sense. Byron's skill at projecting big bold fluttery solos and just as easily vulnerability and poeticism in his tonal contouring was a great privilege to witness. One of the best live gigs I've attended in simply years. Stephen Graham