Because there is a lot of vivid poetry to this album certainly The Song Is You counts as one of the best of 22 so far. It never gets caught in any longueurs difficult surely given the stateliness of the material. The duo do not need to shout to be … 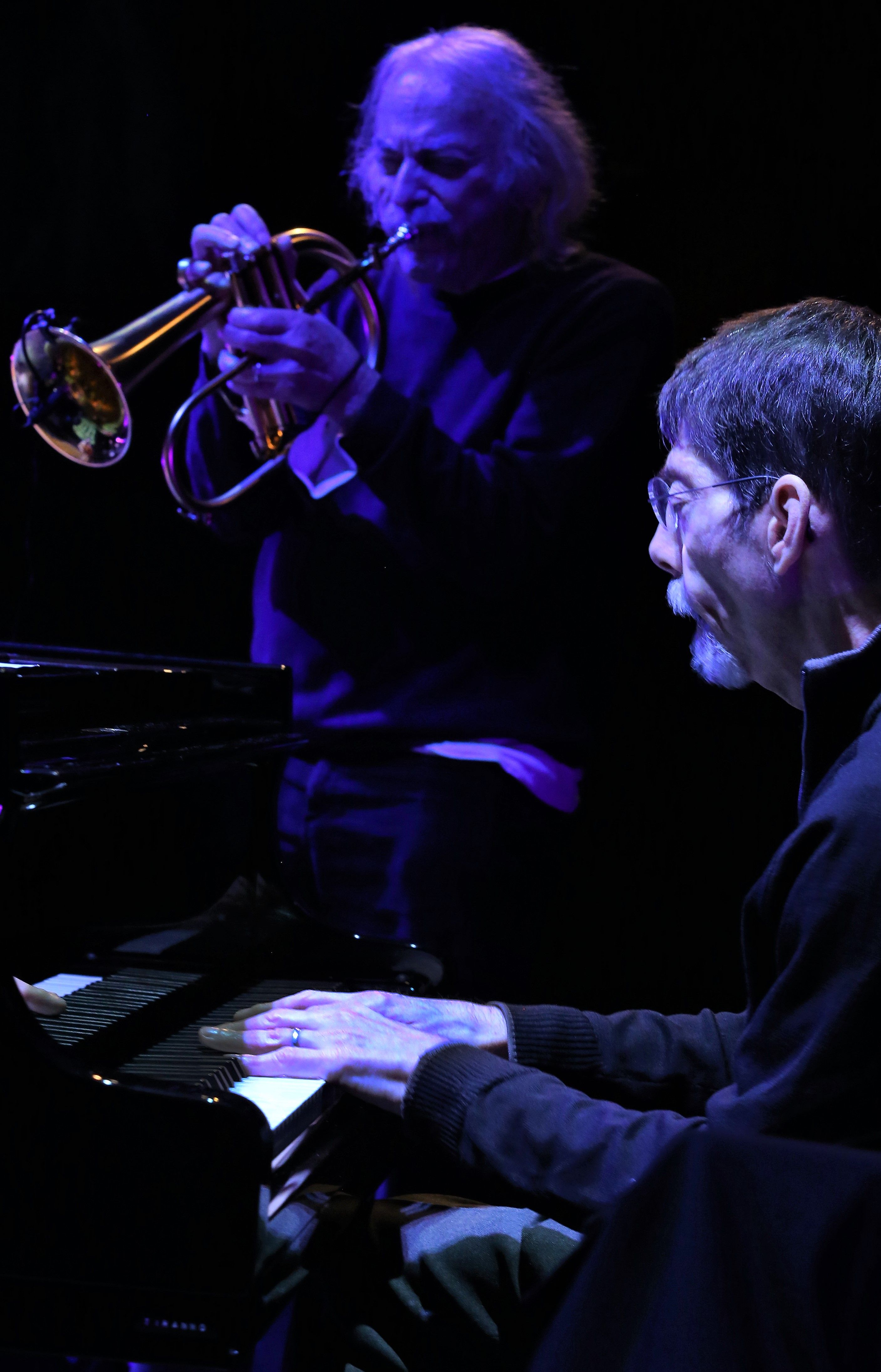 Because there is a lot of vivid poetry to this album certainly The Song Is You counts as one of the best of 22 so far. It never gets caught in any longueurs difficult surely given the stateliness of the material. The duo do not need to shout to be heard.

An easy highlight is the new version of Fred Hersch's 'Child's Song' with its open almost South African township harmonic flavour which has new standard if it isn't already one written all over it. A gently lapping motion finds Enrico Rava showing his mastery of a held note and that underlines how the simple can sound so complex and still human reminiscent of the way the much missed Tomasz Stańko would also do a lot with a small number of notes it seems.

Hersch, 66, on his own tune not so much comps as oversees, expectant as Rava delivers his interpretation of the melodic notes and adds his bespoke grace notes and unique accentuation.

The piano master hasn't until now recorded for ECM before in his substantial discography while Italian master Rava, 83 later this month, is by contrast part of the fabric of the German label. Also illuminated by the duo's beautiful take on the Jobim classic also known as 'Portrait in Black and White' and 'Zingaro' deriving from 1967's A Certain Mr Jobim. Produced by Manfred Eicher the album also includes a free improvisation (again the Stańko comparison bears witness) and Rava's 1996 Label Bleu Noir delicately inuring piece 'The Trial' is another selection that matters.

An album that is a meeting place for the European avant-garde that Rava has for many years been part of and the American tradition of bop, standards and ballads that is at the centre of the Hersch universe where he has always altered the optics to make his choices so modernistic while still remaining true to the heart of the matter. The pair inhabit a mysterious mansion in the sky that is more transcendentally Manderley than Gatsby and The Song Is You may stand as a synecdoche for jazz in 2022 given how introspective a great deal of new music is this year as we emerged from Lockdown. What joy. What enlightenment. SG

Paginini of Penge Dylan Bates is on Laura Jurd's upcoming album. The charming 'Henry' with its rumbling undertow and Scottish feel (imagine the North Channel somehow transformed into the balmier Mediterranean given its warm cafe bar-like lilt) - …

The charming 'Henry' with its rumbling undertow and Scottish feel (imagine the North Channel somehow transformed into the balmier Mediterranean given its warm cafe bar-like lilt) - new in the 1 luv track of the day spot - is one of three tracks streaming so far ahead of The Big Friendly Album Laura Jurd's latest which is to be released in September. Featured guests on this studio album that finds Laura switching from her customary trumpet to cornet and piano are Django's brother violin erstwhile wunderkind and still fresh faced Paganini of Penge Dylan Bates (Human), fine Ligeti attuned free improviser violinist Mandhira de Saram, accordionist Frode Haltli, the hugely admired still too underknown flautist Finn Peters and sax legend Mark Lockheart (Dreamers, Polar Bear). De Saram was on Jurd's 2012 album Landing Ground back in her Chaos Collective phase when Jurd first emerged as a protean fully fledged prog, jazz-rock and avant chamber jazz force to be reckoned with - only 21 when she recorded the album and which proved astonishingly cohesive and rewarding at the time. Jurd’s sound recalled long-ago Kenny Wheeler themes and as the album progressed intimations of Dave Douglas. Core Jurdians a decade on are euphonium player Martin Lee Thomson, tubaist Danielle Price, guitarist Alex Haines, bass guitar star Ruth Goller (Let Spin, Melt Yourself Down, Sarah Gillespie band etc) and drummer Corrie Dick. Tunes are by Jurd.