Quad, by Samuel Beckett, with music composed by Ethan Iverson, premiered in a Happy Days/Banff-commissioned world premiere production by the Mark Morris Dance Group. The music amounts to a percussion piece performed by four musicians recruited …

The music amounts to a percussion piece performed by four musicians recruited locally. In terms of its style the music of Steve Reich sprung to mind in terms of rough navigation especially in the sharing of a certain affinity to repetition and ritual.

In terms of the instrumentation the use of blocks and tiny bells were most significant and ultimately the beating of a drum. Tintinnabulation was kept to a minimum yet unmistakable and yet in a certain section, a highlight, possibly delivered a few times, was significant in its effects. Mark Morris sat — his audience in the Regal were dotted about approximately in the round — cueing some of the trickier sections, mainly just watching, and the actors did their dance, a walk, a dash, a circling, according to the mathematics of Beckett’s script.

Quad is a play about subtraction and yet the multiplication of the scurry and near collisions of the actors within the strictness of the metre, time and above all silence was achieved in what was a highly stimulating performance enhanced by the score.

Beckett image spray painted on a shop in the Hollow, Enniskillen. Photo: marlbank.

Under a harvest moon a very special occasion this because “cosmic” Clive Culbertson was in the house and on bass guitar joining the erstwhile Waterboys drummer Peter McKinney who played superbly all night in a cracking rhythm section completed by John McCullough on organ/keys and Anthony ‘Sailortown’ Toner rhythm and occasional lead guitar and vocals with Lisburn blues legend Ronnie Greer on lead blues guitar and vocals. The main takeaway from the gig was that Ronnie mentioned to us all in the audience that he is about to record a live album in Lisburn to follow on from The Jazz Project and the earlier A Lifetime With the Blues.

The first set opened with a rollicking ‘No Brainer’ and highlights later included a superb ‘Cajun Moon’ – Toner elegant on this JJ Cale favourite. The take on Mingus’ ‘Nostalgia in Times Square’ was a little ragged however the Dan’s ‘Do it Again’ raised the bar to new heights and the Chicago blues got the room going. There was a great turn out in the Gallery and very nice to see Sidewalk Boogie drummer Des Campbell in the front row lapping it up – and Blakes of the Hollow owner Pat Blake where the Boogie are a house band one of the luminaries in the audience. 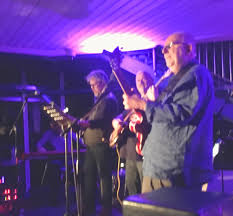 John McCullough excelled best of all grinding in the Jimmy Smith segment. In the audio Clive Culbertson is on ‘High Spirits’ with Van Morrison and the Chieftains as he is on what became a peace meditational: the poetic ‘Coney Island’. Peter McKinney also in the audio with the Waterboys is on the wondrous ‘Fisherman’s Blues’.