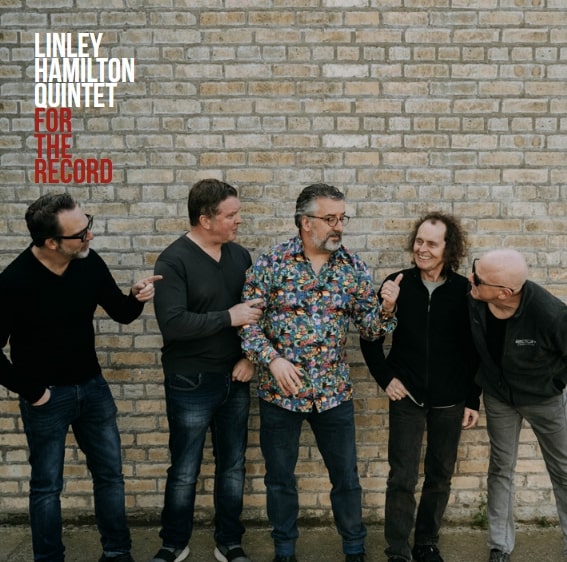 Setting out ‘Right Angle’ lands in a bustling Freddie Hubbard type space. Overall the mood is more easy listening. There is a lapping contentment from Mark Egan, the original Pat...

Recording in the Camden studio, Dublin, the quintet are completed by Egan’s fellow American erstwhile Impossible Gentleman and Hudie Ledbetter enthusiast the great Adam Nussbaum on drums who is pretty laidback throughout; and by studio owner Cian Boylan on piano who co-produces and who takes a bright solo towards the end of the 'Mo Hip' and who returns from Hamilton’s excellent Making Other Arrangements.

The album comes to a standstill with the clarion call of ‘And I Love Her’, a choice of a Paul McCartney song apt coming from the pen of one of the greatest names in music and the Irish diaspora. Hamilton live can pull off a solo like this to great effect and for instance I’ve heard him interpret even ‘Amazing Grace’ in a way that can win over even the most complacent and uninvolvable audience.

Nussbaum, on brushes, listens better than most, one of his biggest talents. So many musicians may think that they are listening but are only playing the music in their head and not what is around them. And already he is making a significant contribution. Listen too for the introverted bass solo that emerges, a gentle throb to Egan’s sound and plenty of textural detail in his sound flowing around too. This album will with any luck reintroduce Egan to jazz audiences who have forgotten about him for decades. Certainly anyone hearing this will prick up their ears given how startling his contribution is.

‘Split’ is uptempo, landing in a tough hard bop space, again with a strongly melodic theme where the harmonies crush in tightly; Egan kicks off ‘Origin’ finding an oasis to feel at home in and this is an interesting tune in terms of construction because it is as if the bridge comes first; ‘Sure Would Baby’ an old Nussbaum number that for instance featured on Amazing with Dave Liebman and Steve Swallow on their 2011 We3 album here without any whistle-like flute. Instead it is begun by tinkling piano and then a new mood full of an even more laidback feel. ‘Seesaw’ begun by Egan transforms a deliberate hesitancy in a robust punchiness; ‘Holly’s Moment’ dedicated to Doc’s young daughter has an optimism to it, an attribute that swirls abundantly on the record going here into deeper hard bop territory once more. Indulge yourself, lean back and you’ll enjoy the relaxation of the overall sound. Be happy. These guys playing together certainly are. Stephen Graham

Linley Hamilton plays Pizza Express Holborn, London on 18 February. The For the Record quintet are in the Brilliant Corners line-up in Belfast at the Black Box on 4 March launching the album; Anderson's, Sligo, on the 5th; Brewery Lane Theatre, Carrick-on-Suir, co. Tipperary, the 6th; and Arthur's, Dublin, on the 7th.