Maridalen dropped in like something out of outer space last week on release. You may not have heard of any of the names of the band behind the record. Let's introduce them. On trumpet it's Pixel's Jonas Kilmork Vemøy. Other members are saxophonist …

Maridalen dropped in like something out of outer space last week on release. You may not have heard of any of the names of the band behind the record. Let's introduce them. On trumpet it's Pixel's Jonas Kilmork Vemøy. Other members are saxophonist Anders Hefre and double bassist Andreas Rødland Haga. They compose and arrange all the material and it all transports you into another world. Their world.

Jonas was on the other end of the phone from Norway earlier this afternoon and gave marlbank a little background. Maridalen, as well as being a band and a record is a place, actually the name of a church and a valley in Oslo. The sound is not exactly urban, nor bucolic. It does crucially however sound intimate. Interior rather than exterior in inspiration sums up the recipe, a dreamworld essentially warmed by the sounds of distant Swedish jazz visions and the great traditions of the music everywhere. Notions of landscape are redundant to an extent.

I see embers and hear the drummer-less trio as time travellers and yet geographically they also travel to a Russian village metaphorically on one tune. I see old photographs when I listen. But they are invisible for now. I think of old clubs, places I've never been to but ''know'' them suddenly through sound pictures. The legends that jazz has left behind for us and still generates flicker and stir. There is a universality to Maridalen.

Maybe it comes from the wood everywhere in the Maridalen church located not far from the centre of Oslo a place that operates in the summer for services and is closed in the winter. Jonas tells me the church is also used to film a comedy show airing on Norwegian TV. The trumpeter says he hadn't recorded there before but has played there at weddings. 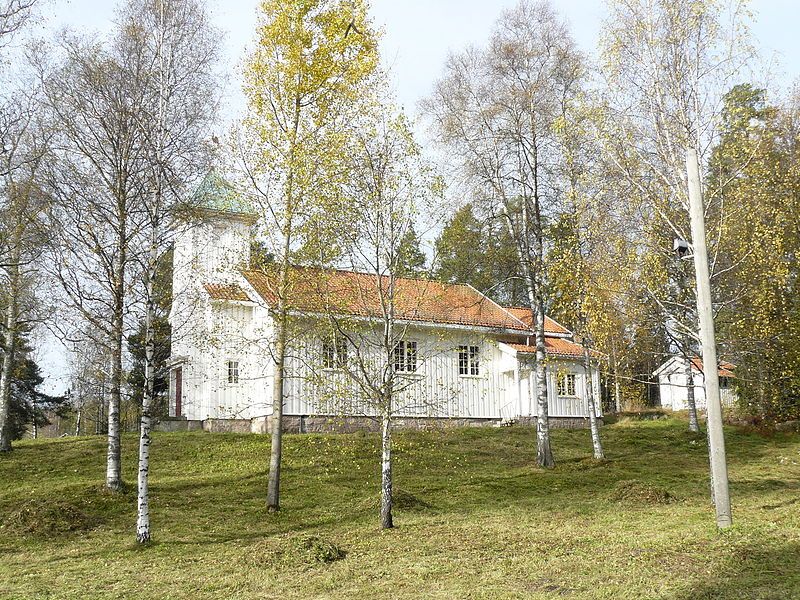 Speaking from his home where earlier today he was busy performing a concert for a pop project with singer Helena Bøksle he himself is known to UK audiences for appearances as a member of Pixel such as at the outdoor Match and Fuse festival in east London held in 2012. Jonas says with Lockdown it's been a quiet year for Pixel involving a focus on preparing for a live recording that is drawn from a dozen concerts they have performed together. Mixed and mastered it is ready for a 2022 release. The Norway return to normality, he says, ''is based closely on what happens in Denmark, a week or two different'' in terms of the loosening of restrictions.

In Oslo when he is gigging he plays in local jazz clubs such as Victoria and further afield when he jumps into a car with his bandmates to play Bergen or Trondheim or Stavanger. When touring resumes Maridalen will play elsewhere in Norway such as in beautiful Ålesund in the west near Sula where Norwegian legend the great Nils Petter Molvær is from. Jonas says he was influenced by NPM back in the day and especially Khmer.

Jonas and his bandmates like Swedish jazz, Jan Johansson, Bernt Rosengren and Lars Gullin from the 1950s and 60s. And yes the sound of Maridalen is very 50s and acoustic. It's like a ''lostness'' and yet you find yourself. Little touches on Maridalen enhance the very hewed organic nature of not only the trio's approach but also the craft and skill of their musicianship. So there is even more. You get natural bird song ''and the sound of a train'' Jonas mentions in terms of field recordings from the Maridalen valley where the church is located fed in to 'Koral' at the beginning.

The saxophones that Anders Hefre uses on the album involve a little baritone sax overdubbed on the beautiful waltz 'Vals fra Bjølsen' (the latter name also a place in Oslo) and tenor. Hefre also uses clarinet. On the 'Urverket' track inspired by the movement of clockwork there is a little overdub possibly recorded on a synth but comes across like a glockenspiel and is also highly effective in context and acts to pause, to linger. Make your day with Maridalen. You won't regret it. Not for a moment. On Jazzland. Maridalen, top, Jonas Kilmork Vemøy is on the left. Above where Maridalen was made