Fans of Nikki Iles step this way even if you have never heard of Russian Olga Reznichenko nor she possibly Iles as the pianist makes her debut recording here at the Loft studio in Cologne. And yet there is a twist when this music masters student in …

Fans of Nikki Iles step this way even if you have never heard of Russian Olga Reznichenko nor she possibly Iles as the pianist makes her debut recording here at the Loft studio in Cologne. And yet there is a twist when this music masters student in Leipzig traverses the pastoral, bucolic domain that Iles habitually chooses. Also factor in the inevitable influences of Reznichenko's former teachers Michael Wollny and Richie Beirach although Reznichenko is enough of an individualist to swerve away from copying their styles or anyone's (you might think too of Gwilym Simcock a little in some passages). With bassist Lorenz Heigenhuber and drummer Maximilian Stadtfeld there is a quiet and convincing intellectualism at play and while suffused with a chamber-jazz language the direction also has a relationship with classical music although it's certainly more jazz than classical beyond modal building blocks and a certain impressionistic sideways glance that somehow can gain an unlikely intensity. The pieces are her own and certainly retain your interest. 'One Hit Backlash' is more dynamic while 'Ground Most Must Take' has an avant beginning thanks to the bassist's aching high register sense of abstraction. It's all obviously impressive playing technically. Whether the album grips the listener throughout is another matter although there are flashes of inspiration that make you stay for the long haul and makes this a promising debut where the focus ultimately is really on the pianist more than the trio as an entity even if it is not designed as such. But isn't that often the way with a piano trio no matter how democratic a construct it is? SG

Jazz at the Bohemia. It has a certain ring to it, doesn't it? But this wasn't 1956 in Greenwich Village listening to the Jazz Messengers at the Cafe Bohemia, instead, voilà, Finchley High Road in north London near where Tubby Hayes and jazz heroes …

Jazz at the Bohemia. It has a certain ring to it, doesn't it? But this wasn't 1956 in Greenwich Village listening to the Jazz Messengers at the Cafe Bohemia, instead, voilà, Finchley High Road in north London near where Tubby Hayes and jazz heroes of lore used to play at the Torrington a stone's throw away a half century ago. But sharing the spirit it was pretty retro and tapped into a classic jazz strand that sometimes we take too much for granted.

Playing a Hammond B3 with the Leslie speaker out of sight behind him, the same handsome organ Jimmy Smith, the Turbanator the late Dr Lonnie Smith, Joey De Francesco and Jimmy McGriff had actually played on, veteran Hammond player Ed Bentley, a cult name on the London deep jazz neighbourhood club scene particularly at venues such as the 606, told the audience later ''I saw Jimmy Smith playing at Crystal Palace on it.''

This was an authentic sound in the basement room of this very spacious North Finchley pub with more jazz heroes to follow later in the run including Scottish legend Jim Mullen who Ed, speaking briefly to marlbank during the break, usually plays with on guitar. Here, though, flat cap-wearing Mark Ridout, father of superb new generation trumpet star Alexandra Ridout, was on guitar as the slightly underamplified harmonic foil to Bentley who certainly sounded very Jimmy Smith-like at times, no small comparison there given how Smith remains among the cognoscenti revered 17 years after his death, while saxist Simon Bates Ed explained was here with him for the first time, wailed suitably and was best the more gut bucket if you like he became. 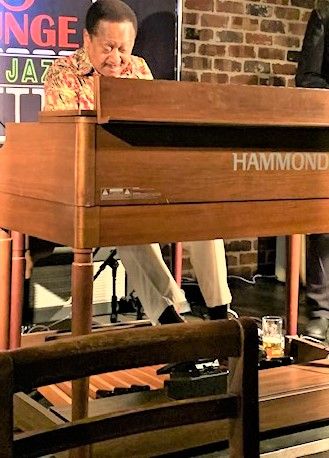 Ed Bentley in the Bohemia, above

The two-set mix included Horace Silver classic 'Song For My Father' and other standards. But best perhaps of all was Bentley's 'Sea Front' the band joking with the leader (the front row audience members could easily hear the banter) that Southend was perhaps the beach in mind, given it is a favourite of the Hammond organist's.

We also heard what Bentley with his light American accent deemed ''appropriate'' 'Everybody Needs a Drink’, the saxist querying ''Straight In?'' ''Never,'' said Ed, jokingly. His bass pedal work drove the whole band, with great walking lines and fine mastery of samba beats when necessary. 'Back at the Chicken Shack' was excellent with its tippy-tippy beat and the sax player quoting 'I Get a Kick Out of You'. ''Next time I’m going to dance, Ed'' shouted someone in the audience early on.

'Recado Bossa Nova' was a great way to open the second set ornamented by Alun Harries' frantic rolling drum swirl and firm grip of the insistent rhythmic tug to the thing while saxist Bates was best overall with 'On Green Dolphin Street' while 'Bolla' from Bentley's 1990 album Bolla Keyboard Blues among other versions was another fine contribution from his discography. The classic 'Someday My Prince Will Come' was a little ragged when Ridout lost the drift a little towards the end. But the treatment of 'Softly As In A Morning Sunrise' with its reggae tilt suited the sax player more, Bentley joshing with the audience noting ''you didn't expect that!'' 'Autumn Leaves' had a contented feel right at the end.

Bentley is a fine player and certainly a musician's musician who needs to be written about far more than he gets credit for. He was subtle with his volume swells and never overly showy but generated a lot of compelling interest throughout, mashing and pounding – and always with the requisite fleetness of foot. SG