Appearing at the most recent running of the Late Late Show last night this was a good chance to catch keyboardist and singer Renato Paris again who impressed us a lot earlier in the year in Camilla George's band at the Jazz Cafe. Here the south … 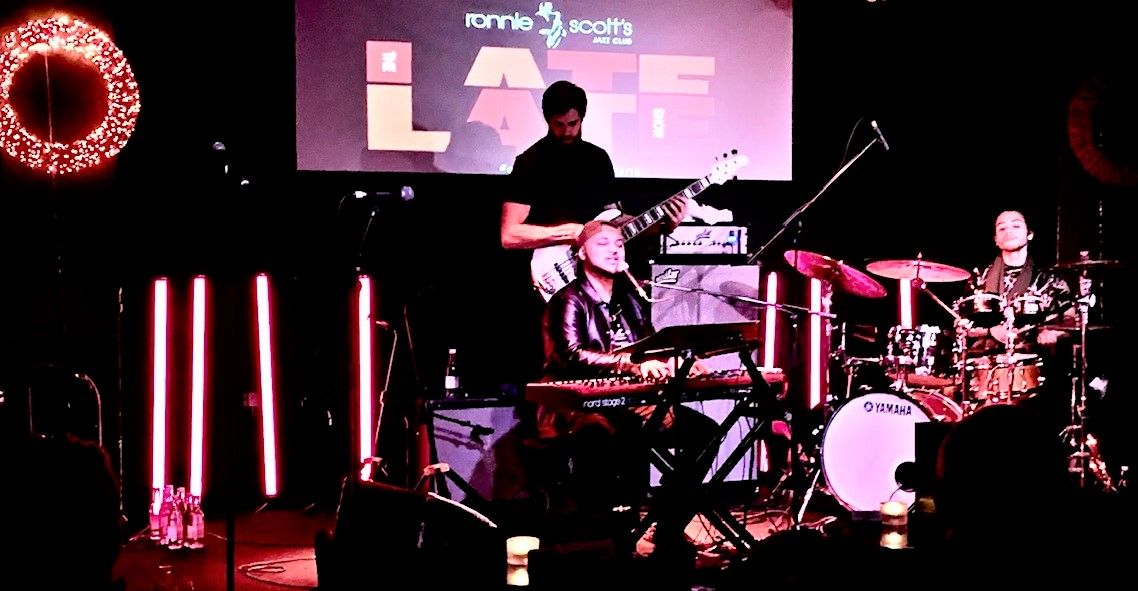 Appearing at the most recent running of the Late Late Show last night this was a good chance to catch keyboardist and singer Renato Paris again who impressed us a lot earlier in the year in Camilla George's band at the Jazz Cafe. Here the south Londoner was with his trio, the tall, heavily-bearded bass guitarist Benjamin Muralt and the young up-and-coming Dennis Chambers and Adam Nussbaum-inspired drummer Zoe Pascal. Before the trio went on and during set breaks Claudia Wilson from Pure Vinyl in Brixton as stageside DJ spun tracks that included the Langston Hughes-inspired 'I've Known Rivers' by Gary Bartz and Ntu Troop and cuts from Dwight Trible, Herbie Hancock ('Butterfly') and Ahmad Jamal ('Poinciana'). ''Auntie Claudia we call her,'' grinned Paris, dressed casually in a leather jacket, wearing his baseball-cap backwards.

When he sings Renato sounds quite a lot like Stevie Wonder. His scatting is a pleasure. And the overall flavour had a feelgood Stevie vibe. Renato's changes are very listenable in a 1970s pocket groove vein, here playing Nord Stage 2 keys, beginning with 'To Be With You'. Muralt's bass-led feature early in the set was introduced too soon. But later he began to steer the beat more his way and Pascal responded especially when he became more latinate. 'Every Little Thing' was one of the best songs of the first set and the treatment of Stevie Wonder/Susaye Greene song 'I Can't Help It' sung by Michael Jackson on 1979's Off the Wall was well-judged. Guests later included gutsy alto saxophonist Tom Waters (son of boogie-woogie giant Ben Waters) clad in a University of Surrey top who sounds a little like David Sanborn and who has a 9 January slot at Ronnie's coming up with his band Electric People.

Discover Renato on this fine song from Feast by Pyjæn

We are in an OV Wright state of mind today got there firstly by listening to Leon Bridges records and then thinking immediately (because Leon is like the OV or Otis for today) of Dana Masters (top) confirmed to play the Soho Pizza in January in a plum booking for the club. Dana, from South Carolina living in Northern Ireland for many years, and until recently a backing singer with Van Morrison gelling especially when Sumudu was in the band say on 'Transformation', does a fine version of 'That's How Strong My Love Is'. OV's version is the one we like most even more than Otis Redding's although Dana's is closer to the Otis.

We heard Dana sing the Roosevelt Jamison classic in Derry once and that was enough to get into her sound for good. As a songwriter we liked the singer's original 'Crossing Lines' probably best of hers that we know. She has a gospel pedigree as well, and is a fine tambourine player, and when covering pop has a good affinity with Corinne Bailey Rae when she covers 'Like a Star'. Her bands usually are mainly jazz players.

Read more, Dana in Belfast at Out to Lunch

The Pizza Express Jazz Club date, turning around for two houses that night, is Saturday 22 January