Seven-string guitar virtuoso the Brazilian player Luiz Morais introduces In the Weave with his brightly arranged composition 'Scorpio' drawn from his upcoming In the Weave. Morais is playing dates this autumn including Soho's Pizza Express Jazz … 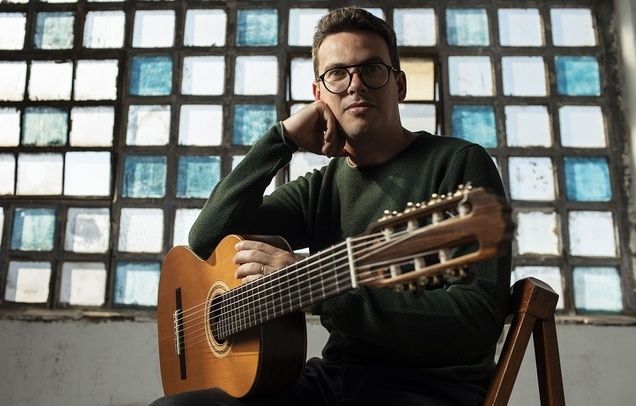 Seven-string guitar virtuoso the Brazilian player Luiz Morais introduces In the Weave with his brightly arranged composition 'Scorpio' drawn from his upcoming In the Weave. Morais is playing dates this autumn including Soho's Pizza Express Jazz Club on 24 October just ahead of the album's release. The advertised line-up of flautist Gareth Lockrane, pianist John Turville and drummer Marius Rodrigues join Morais at the Hampstead Jazz Club on 18 November. Special guests on In the Weave include mandolinist Luis Barcelos, pianist Alberto Palau and singer Karthika Vaidyanathan. Luiz Morais, above

Ask yourself what makes good jazz club programming? Depends on what ''good'' means. It isn't necessarily a case of a club putting on your own personal favourites although of course that's what you go for after a while when you know that someone you …

Ask yourself what makes good jazz club programming? Depends on what ''good'' means. It isn't necessarily a case of a club putting on your own personal favourites although of course that's what you go for after a while when you know that someone you really like is coming back to play.

It's more a consistency of approach and even more than that reliable taste. To be real no club is ever going to have top artists every night. It's impossible. ''Top''? Meaning the very best examples of their style. Because there is a supply and demand thing to clubs if someone isn't touring then it isn't possible that they'll play your jazz club. If your jazz club can't afford their rates they won't play your bestie either, they will play the place down the road. If your place is too small there isn't a hope in hell that you as a programmer unless you fluke it can put on certain acts even if you put the ticket prices up to the max. Fluking is part of your magic.

''Good'' knows your audience, the regulars who come and chat about what they like. That's what makes a club after all, a bunch of people who come together because they know what they like and like it in that place. It's not a huddle of people randomly milling together. If you chat to audience members you find out why they have often taken a lot of trouble to get there. They choose to be there rather than somewhere else. You have to remember that. It is rarely random especially in these Covid times when planning is more important than when you just dropped in more and rocked up. Often the regulars marlbank encounters describe that they are there because they like the artist and that is more important than the club. And yet some punters love the place so much where possible they become members and go on trust if they don't know the act. ''Clubs'' can be ''clubs'' without a membership scheme by the way and usually are no-strings-attached. ''Clubs'' can't be ''top clubs'' however if their programming is stale or so-so.

''Good'' isn't for a programmer to show their programmimg chops, the indulgent putting on only of the esoteric just because the photos and the sales pitches look good or the act complies with a very subjective taste that may or not be shared by the community the programmer is supplying. Being proactive (ie knowing what you want and procuring it) rather than reacting to the hustle is better. In some clubs the programmers (and this is a pity) don't attend gigs enough to actually hear the fruits of their labours in real time. They only turn up occasionally. The responsibility of a programmer is huge. You can't just put on party bands all the time. Some jazz fans don't want to party, they want to listen and vice versa. Putting on avant garde jazz to a party crowd isn't a good idea. Putting on party jazz to an avant crowd similarly.

Just booking bands who ring in and hustle isn't ideal either. Some acts' agents are just good hustlers and better than their jazzers are at jazzing! Here's the ideal: play to what your club wants. Know your audience. Talk to the people who pay good money to come regularly because they matter more than the views of people who don't show up and only think they know. Hear their dreams. Who, in an ideal world, would they most want to play in their club? Find a way to curate that dreamsville whether as distant as a Henry Mancini song in the style of a Sarah Vaughan, Brad Mehldau, more recently as a Ben Monder or in a different idiom entirely. Your skill is in the choosing, the curation, the melding together of elements that somehow hang together and you have to feel the place and know what it all does to the people there when it happens in terms of switching on an electric light in their hearts and minds. Otherwise you're simply not cutting it.