Jazz elements of next month's FLive festival in Enniskillen include the duo of fine Derry scene singer Victoria Geelan and Belfast pianist-Hammond organist Scott Flanigan and a return to the festival for Mark Bradley's Jazz Gazette among the line-up. Scott is a regular performer at Berts jazz club in Belfast and also in the city hosts his own weekly club - Scott's.

Stylistically Scott is akin to James Pearson and was superb on Dave O'Higgins and Rob Luft's 2019 Monk and Trane homage in a formidable band along with the great Rod Youngs.

Trumpeter and singer Mark Bradley plays the Gin & Jazz night at the Westville on Saturday the 8th.

Geelan and Flanigan's appearance is on Sunday the 9th in the Gallery bar of the Ardhowen theatre, the event spanning Irving Berlin to Burt Bacharach repertoire.

Victoria memorably appeared in the main room at Ardhowen in 2014 with Derry icon Gay McIntyre and appeared upstairs in Pat's at FLive in 2019.

On Scott Flanigan with Dave O'Higgins

A review of Point of Departure, Scott Flanigan's debut 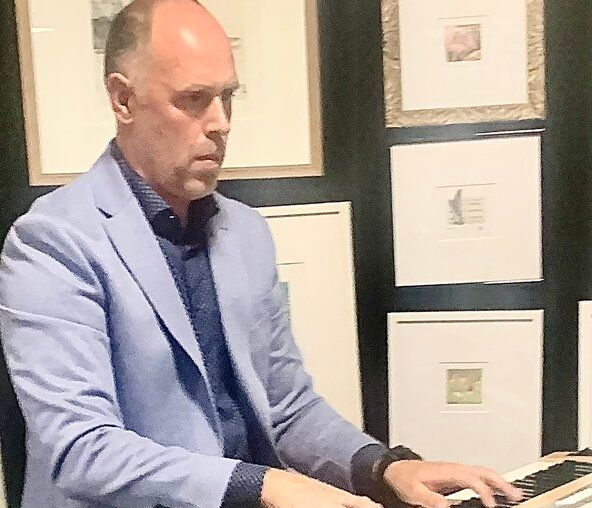 As if a clock is ticking towards ignition the sombre 'Ruins II' is a sobering beginning and on 'Ruins IV' ending to this - Dutch pianist composer Wolfert Brederode's new First World War inspired album. A string quartet and percussion in tow …

As if a clock is ticking towards ignition the sombre 'Ruins II' is a sobering beginning and on 'Ruins IV' ending to this - Dutch pianist composer Wolfert Brederode's new First World War inspired album. A string quartet and percussion in tow Brederode is with percussionist Joost Lijbaart and the Matangi Quartet. The Manfred Eicher produced recording was made in Bremen.

There is such a developmental discipline throughout built up from the rustle of Lijbaart's brushes and carried by the hovering of strings. Dazzling pianism framed inside a transcendental dream consciousness, war in Europe whether 20th century global conflict or perilously now in Ukraine is in the mind's eye inevitably as we listen.

The violin soloing on 'Cloudless' against a wizbang bomb-like streak of a sound achieved perhaps something like a bow on a cymbal's edge allied with the detonation of bass drum and colouristic percussion is emblematic of the piece and overall highlight. 'Ka' sounds very unearthly and has massive stealth resource in its descriptive armoury. And 'Duhra' has more a modal sense.

While some tracks are of less relevance to a jazz audience certainly 'Duhra' is highly pertinent and with violin soloing against piano there too is that genre-less quasi classical crossover area navigated expertly.

Away from the main 'Ruins' suite there is plenty of interest so 'Nothing for Granted' while doleful in its martial beat has a luminous quality to it and that lustre is a characteristic so evident throughout. Flickering flames sketch the horror of war and serve as a warning to us all through the humanity of this moving vision as conscience and - to extrapolate further given such unease - soothsayer.