Track of the day: Omer Klein trio and Sun Girl ****

Here's the latest from Personal Belongings – Sun Girl. Deftly developed with a patter of rhythm like an intimation of samba and consummately understated chord changes that blossom into a warm melody it's so concise and communicative. Klein's touch …

Here's the latest from Personal Belongings – Sun Girl. Deftly developed with a patter of rhythm like an intimation of samba and consummately understated chord changes that blossom into a warm melody it's so concise and communicative. Klein's touch caresses and opens the sound right up without any need for overstatement. Warner Music International are putting out what by the sounds of it is a must-hear record from the trio of Germany-based Israeli pianist Omer Klein on 17 September. We started getting interested in the whole project in June on hearing 'Najara'. If you're into Aaron Goldberg beat a trail. Hearing 'Shake It' (although not the album version) upped the ante as does this further. With Klein are Haggai Cohen Milo on double bass and Amir Bresler on drums. Hopefully they will play the UK sometime in the not-too-distant future. It's a sensational deep head jazz club sound in the best traditions of the trio tradition reborn since Brad Mehldau, Jason Moran and est's innovations made it sparkle again.

Shaw thing as Melanie Charles covers Woman of the Ghetto 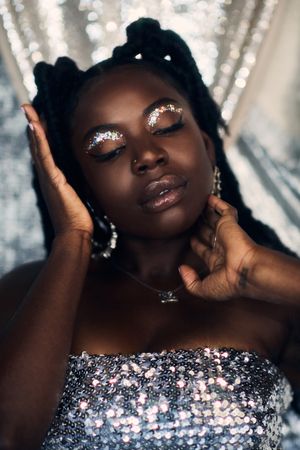 Ahead of Y'all Don't (Really) Care About Black Women Melanie Charles covers Marlena Shaw classic 'Woman of the Ghetto' the Shaw, Richard Evans and Bobby Miller socially conscious classic from Shaw's 1969 Cadet album The Spice of Life. Charles was born in Brooklyn and is of Haitian descent and attended LaGuardia High School for the Performing Arts where she studied flute and vocals and later the New School where she was a contemporary of alto saxophonist Lakecia Benjamin (who appears at this year's London Jazz Festival at Cadogan Hall on 13 November).

Also known earlier in her career as d'Flower definitely check out The Girl With The Green Shoes back in 2017 (that included the track 'Mantra') for an earlier touch of her sense of experimentation and sheer class. The songs Charles interprets on the upcoming Verve record, which is an October release, are LP version listing: Side A: 1. God Bless The Child; 2. All Africa (The Beat); 3. The Music is the Magic; 4. Perdido (Reimagined); 5. Pay Black Women Interlude; 6. Woman of the Ghetto (Reimagined); Side B: 1. Jazz (Ain't Nothing But Soul) (Reimagined); 2. Detour Ahead (Reimagined); 3. Go Away Little Boy; 4. Beginning to See the Light (Reimagined); 5. What A Difference (Reimagined).