Pitch perfect for taste and spirit Billy Drummond consummately seals the deal with the snap, crackle and pop of stick, cymbal and drum as he urges his fine band on. How they respond is so meaningful it is nothing short of a style evolution beyond …

Pitch perfect for taste and spirit Billy Drummond consummately seals the deal with the snap, crackle and pop of stick, cymbal and drum as he urges his fine band on. How they respond is so meaningful it is nothing short of a style evolution beyond the evident achievement of retro revelation.

So, quartet album Valse Sinistre makes it into our top albums of 2022 thus far high up for quite a few reasons. First off is the curated choice of material that remains true to its overriding philosophy - which is hard bop and beyond and the timelessness of 1950s and 60s African-American rooted hard bop that has influenced a global community of fans and musicians of all races, genders and identities who love the music of among many others, Jackie McLean, Horace Silver, Tony Williams and Carla Bley to this day.

Bley is significant given that the title track is her composition 'Valse Sinistre'. Produced by the greatest hard bop trumpeter on the planet Jeremy Pelt, drummer Billy Drummond hasn't made an album of his own in many years and recruits some players here from a different generation who match his stellar chops and connoisseur sensibility without being at all pretentious.

The album has some glorious saxophone work from Dayna Stephens and ensemble integrity exhibited exhilaratingly throughout. The Bley composition is one that appeared on the pianist-composer's 1981 album Social Studies.

Not since 1996 album Dubai has Drummond had an album out under his own name although as a side player he has been busy in the last few years, for instance recording on dates led by Charles McPherson and appearing on the Elan Mehler-curated Kimbrough.

On Valse Sinistre Drummond has pianist Micah Thomas with him and who contributes the tune 'Never Ends'. The much-appreciated Dezron Douglas is on bass.

To wrap, Valse Sinistre - recorded in Englewood Cliffs, the recording studio of the late Rudy Van Gelder where John Coltrane recorded A Love Supreme, the greatest jazz album ever made, is issued on a Canadian label of ever growing clout - has among its delights a graceful version of Tony Williams classic 'Lawra' also known as 'There Comes a Time' and Jackie McLean’s Jazz Messengers-beloved 'Little Melonae' from Hard Bop (1957) which is a tone setting way to open the album.

Let's shine one last spotlight on mention of a version of the late Grachan Moncur III's 'Frankenstein' that alto sax icon McLean covered on the 1964-released One Step Beyond. A monster of a record in any sense that you care choose. SG

The Junction jazz bar is to shut

As recently as 2016 marlbank ran a list of 10 neighbourhood clubs in the massive London metropolitan area. We visited most of the clubs selected. Come this autumn 5 altogether will be no more. These were not necessarily that well-known beyond word …

As recently as 2016 marlbank ran a list of 10 neighbourhood clubs in the massive London metropolitan area. We visited most of the clubs selected. Come this autumn 5 altogether will be no more.

These were not necessarily that well-known beyond word of mouth or musician recommendation. Some were quite new, some had been around for ages. But they all catered to local fans. One or two have thrived since despite the Pandemic.

All, upmarket or more modest, were valuable because they had a different feeling than the bigger budget west end clubs where people flock to attend from all over London, the south east and much further afield. These not always unassuming but just as often high quality spots musically catered to locals who did not want to take transport to and from their homes more than a short hop on a bus or a train ride away from their homes near by. They thrived on community spirit that kept them going for sometimes years and years and were a morale boost for local musicians who jammed or played low profile gigs while not on the road. 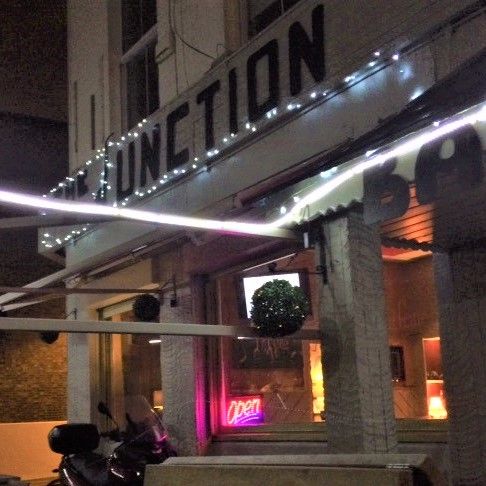 Of the 10 mentioned - the much missed Forge in Camden, very short-lived Jackdaw in Clapton, the excellent Kansas Smitty's in Hackney and the remarkable Hideaway in Streatham are all shuttered.

The fifth and last of these departures to join the list is the laidback jamming spot the Junction, situated to the rear of the massive King's College Hospital complex but closer to the Loughborough Junction railway station than Denmark Hill - roughly half way along going from Camberwell to Brixton.

The Junction is to close its doors in the late-summer, the owners on Facebook explaining: ''Unfortunately the Junction will be closing on September 1st as the landlords have decided not to renew our lease. We’re looking to try to find a new site but might not be able to nor have the available funds.''

The exterior of the Junction photo: marlbank