Janine Irons MBE with the photograph taken earlier on Saturday projected above the stage during A Great Day in London riffing on the Art Kane 'A Great Day in Harlem' 1958 photograph, and featuring Tomorrow's Warriors players past and present. … 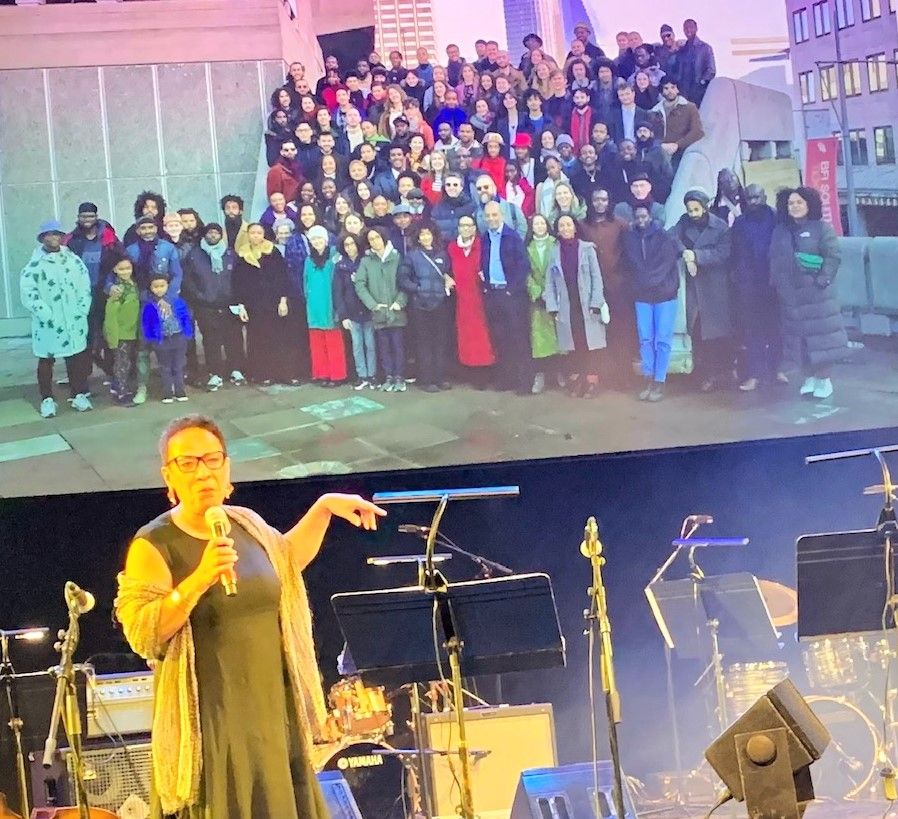 Janine Irons MBE with the photograph taken earlier on Saturday projected above the stage during A Great Day in London riffing on the Art Kane 'A Great Day in Harlem' 1958 photograph, and featuring Tomorrow's Warriors players past and present.

Marking 30 years of Tomorrow's Warriors this was quite a gathering of some of the main stars of the London jazz scene in recent years mixing with new young players who like the established players were nurtured by Tomorrow's Warriors, the development organisation founded by double bassist and bandleader Gary Crosby OBE and Janine Irons MBE that began initially with a jam session at the Jazz Cafe in Camden.

The first note in the concert was unusual given that it was played on bassoon by one of the youngest players on stage Nahuel Angius-Thomas of the junior band whose set fizzed into life when Sons of Kemet tenor saxophonist Shabaka Hutchings and tuba player Theon Cross joined. 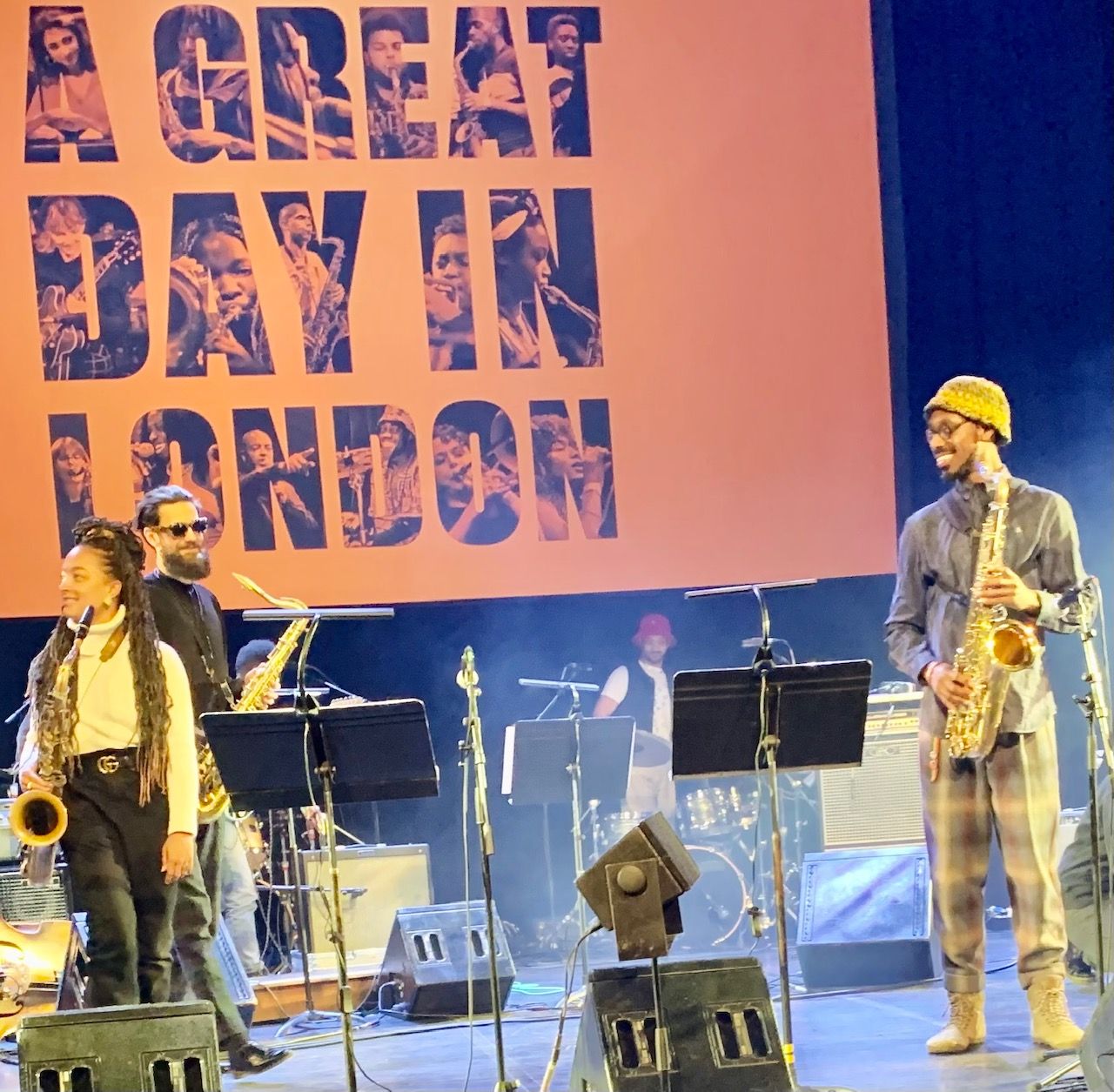 Zara McFarlane led the singers impressively with 'I Am Warrior' echoing a recent Tomorrow's Warriors fundraising mantra and later towards the end of the concert got the audience on to their feet with her enthusiasm.

The Violet Room All-Stars proved the big highlight of the 3-hour duration, the concert split into two halves. The Violet Room in the South Bank Centre was where the players in the ensemble rehearsed hence the name, the all-stars including tenorists Nubya Garcia and Ruben Fox.

A Great Day in London, Tomorrow's Warriors past and present

It was a thrill in the concert to hear Nathaniel Facey of Empirical on alto with Jason Yarde on soprano and Denys Baptiste on tenor harmonising so well. Drum honours of the evening probably went to Moses Boyd in a storming feature with Binker Golding. Binker also delivered a formidable version of John Coltrane's 'Impressions'. Moses set up with drummer Romarna Campbell beside him who also impressed.

Singer Cherise hosted the evening doing MC duties and sang 'Round Midnight' as the overall vocal highlight accompanied chiefly by bassist Hamish Nockles-Moore. The soloing on 'There is No Greater Love' was best of all and Gary Crosby made a notable contribution as the rhythm section slotted into gear. The Soon Come Orchestra later featured the biggest group, conducted by Binker Golding, with Poppy Helmer on flute a standout soloist. 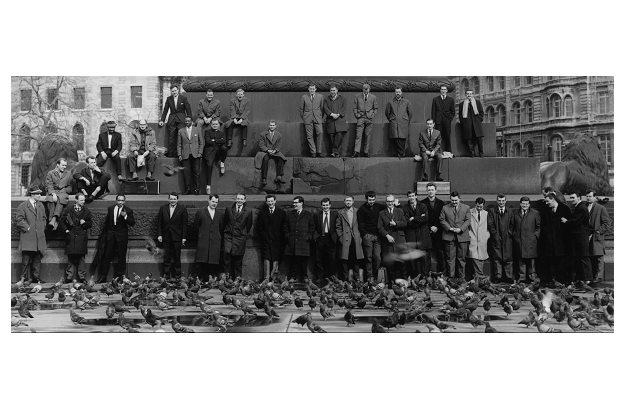 A lot has changed on the UK scene since an earlier riff on the Kane photograph, the Great Day in London photo, above, by Terence Donovan shot in Trafalgar Square in 1962, Janine pointed out in her talk to the audience, given that only one person of colour was in that photo – ''our good friend Coleridge Goode. Joe Harriott was 10 minutes late. That's jazz.'' 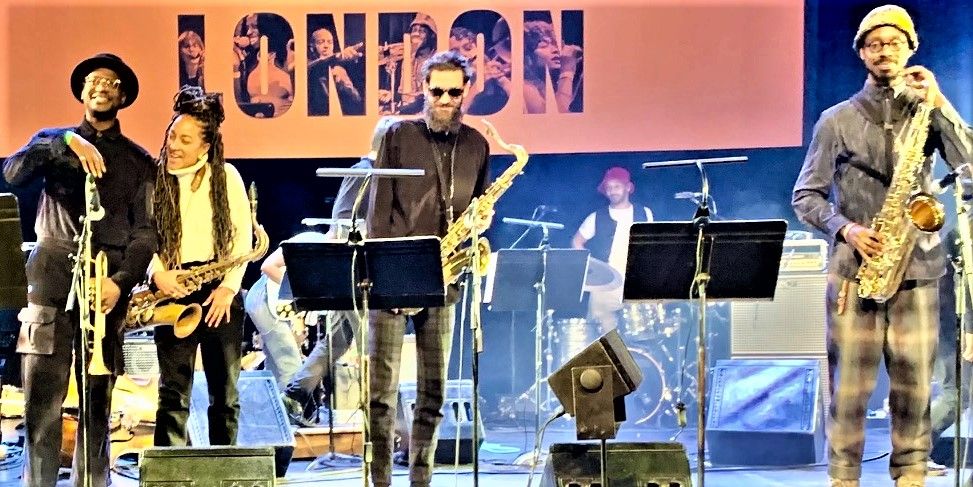 It was a fine evening with some incredible playing from Shabaka, Nubya, Binker, Nathaniel, Ruben and Mark Kavuma chiefly with a few new names to follow for the future especially pianist Alex Ho. Of the senior players in the Nu-Troop line-up drummer Robert Fordjour reminded us of his sterling work over the years with among others Courtney Pine.

Mark Kavuma, top with Nubya Garcia photo: Roger Thomas, and above with Ruben Fox and Shabaka Hutchings at A Great Day in London

When Binker and Moses first surfaced six years ago they did a gig in a place called Brilliant Corners, a Japanese bar-restaurant on the Kingsland Road in Dalston, east London, during a Jazz Kissaten. That evening began with a DJ set by Darrel …

When Binker and Moses first surfaced six years ago they did a gig in a place called Brilliant Corners, a Japanese bar-restaurant on the Kingsland Road in Dalston, east London, during a Jazz Kissaten. That evening began with a DJ set by Darrel Sheinman who runs King's Cross label Gearbox spinning a selection of Blue Note vinyl, drawn from the likes of Baby Face Willette’s Face to Face, Ike Quebec’s Soul Samba and McCoy Tyner’s Asante, and later, this was ahead of the release of Dem Ones, Binker and Moses' inspired saxophone and drums-duelling free-jazz album, the duo began with ‘Black Ave Maria'. Its gently unravelling theme repeated and was elaborated upon in a myriad of ways. Binker quoted Sonny Rollins in passing but more he generally hovered in the Locrian mode Coltrane-like domain with all its grandeur of expression and engagement later dipping into Ascension territory as the sound of a siren by coincidence drifted in from the road.

'Feed Infinite' was recorded in the west country at Real World, one of the UK's most prestigious recording studios, and adds a contribution from Partikel bassist Max Luthert with electronics and tape loops engineered by Hugh Padgham famed for his ''gated drum'' innovation heard on the Phil Collins classic 'In the Air Tonight' (1981) that he produced. So the question desperate to get out rumbles up: is what Luthert does and the alchemy of Padgham's mix simpatico and relevant to the B&M vision?

Yes. Because what these elements provide after the woozy opening whistling wind chirrup to give throughout an illusion of space and in its haze add a backdrop narrative of their own microscopically within the droney wash. Right at the end there's also a Kraftwerk-like touch which comes out of the blue. Think rain lightly wetting your shoulder, you hardly notice that wetness. It's there but you may instead be looking at the foreboding sky. You hear not see the heavens here and it may not be a sunshiney day at all. Binker adds diagonal lines and Moses paints the subterranean duct pipes and wiring, the tangled ropes and netting some of which make it to the surface so Binker in this Coltranian universe can do things with it himself. Weighing in at 8-and-a-half minutes there are no longueurs.

There is a poetry, meaning a kind of momentousness, in 'Feed Infinite' in when the sound is created it is destroyed, that stepping into the same river twice is utterly impossible and is only a fluke that it happened to be recorded in the first place and even more impossible that a universe of individuals can get to experience it. Two versions of the track are available. Don't go for the edited shorter one although the essence is there. SG