Speaking on the phone from his home in West Orange, New Jersey at noon on the longest day of the year Billy Drummond who releases his first album under his own name in many years this summer speaks of doing errands earlier in the day and ''going to …

Speaking on the phone from his home in West Orange, New Jersey at noon on the longest day of the year Billy Drummond who releases his first album under his own name in many years this summer speaks of doing errands earlier in the day and ''going to a friend of mind who's an audiophile with a half million dollar system'' later. ''I've practised,'' he mused.

Outside in the neighbourhood he sees his neighbours' houses through his window. There are also ''squirrels, chipmunks, a family of rabbits'' in the leafy area. The drummer, composer, bandleader and Julliard professor, has lived there for 30 years, his home ''twenty five minutes'' from New York City by car or train.

Now in his early sixties and long since a legend among jazz fans mainly for being on other people's records as a sideperson. But what people. Carla Bley, Horace Silver, Nat Adderley, Vincent Herring, Archie Shepp, Steve Kuhn the list goes on and runs decades long - not to mention touring with Sonny Rollins - and a few choice releases of his own over the years, notably Dubai the last one he put out with its attractively brooding Eastern-tinged minor key feel, a wind-of-change atmosphere to the title track.

Playing in Montreal and in Paris he says when asked about recent gigs the upcoming record is with Drummond's Freedom of Ideas band and first under his own name in some 26 years and is on a Canadian label, Cellar Live, run by saxist and former Vancouver jazz club owner Cory Weeds.

The title track is a treatment of a Carla Bley piece 'Valse Sinistre' a tune that Billy played on the road with Carla. He told the iconic composer and bandleader ''20 years ago'' that he'd do a treatment of her composition. Promise duly kept. Billy says he wrote to Carla recently to tell her the piece would be the title track - to her palpable delight.

Album producer hard bop trumpet icon Jeremy Pelt put Billy in touch with Cellar Live to be part of a theme of African-American leaders going forward to address a lack of representation hitherto on the label.

Billy says Jeremy was good ''to have in the booth as a second pair of ears and choose the best take, whether Take 1 or Take 2. Our opinions might differ but he has good reasons for his opinions.'' The pair have played together on Pelt's records in the past including 2016 gem #Jive Culture.

Recording Valse Sinistre in Englewood Cliffs at one of the world's most famous and history making recording studios - where John Coltrane recorded A Love Supreme - Rudy Van Gelder's, we talk about Rudy a bit who passed away in 2016 and who Billy knew well having made records at the studio ''in the 1980s and 90s and the first 10 years of the 2000s but not for two or three years’’. He says Rudy could be ''prickly'' and that you didn't want to show him any attitude. ''He liked things in particular ways, like where you ate and he had his own protocol''. Billy says he wasn't there to ''ruffle any feathers'' and so following Rudy's preference didn't come into the mixing spot where the engineers were doing their thing. ''Don't play this piano or that'' he would admonish musicians. ''I don't want to have to re-tune it,'' he'd say.

On Valse Sinistre which has among its delights a version of Tony Williams classic 'Lawra' also known as 'There Comes a Time' to be newly reissued in its Play Or Die version is a former Julliard student of Billy's named Micah Thomas who at Julliard was also taught by the late Frank Kimbrough. Billy recorded with Frank, double bassist Rufus Reid and reedist Scott Robinson on an acclaimed complete Monk project that Sunnyside put out in 2018.

Billy explains that he had been playing in the now shuttered Jazz Standard and a guy in the audience, “an older guy who had seen Monk at the Five Spot,” and who turned out to be from the Sunnyside label, liked what he heard and Kimbrough’s mammoth Monk project got the green light for a recording.

Kimbrough died around the time pianist and Strata-East legend Stanley Cowell passed and Billy knew and also had played with Cowell for instance on SteepleChase album No Illusions (2017), again a loss that he feels deeply.

We talk about Jackie McLean a little bit and Billy says that growing up listening to his father's records he loved Capuchin Swing (1960) and includes a version of McLean’s Jazz Messengers-beloved 'Little Melonae' from Hard Bop (1957) on Valse Sinistre.

The late Grachan Moncur III's 'Frankenstein' also on Billy and the Freedom of Ideas' album alto sax icon McLean covered on the 1964 released One Step Beyond is another link.

It is worth pausing to reflect on more of the records Drummond has been on since the 1990s. A lot of his heroes he actually got to play with makes this even more striking. For instance he is on Andrew Hill record Dusk, a late period classic in the great composer's catalogue.

With Micah in the Freedom of Ideas (who Frank Kimbrough his colleague at Julliard told Billy would be great with him having taught him himself) is also the acclaimed bassist Dezron Douglas known in recent times for a fine version of 'The Creator Has A Masterplan' with harpist Brandee Younger and completing the band the tender saxophone genius Dayna Stephens who is superb on the record and completes the quartet.

Billy himself is a natural born-to-play rhythm master. Spang-a-lang, driving rhythms, beautiful cymbal work especially on the David Raksin classic ‘Laura’ leads me to ask him because he played back in the day with iconic trombonist J. J. Johnson if he knows J. J.'s version from the much earlier J. J. In Person. Turns out that he doesn't. But he says he likes the Ran Blake, Frank Sinatra and Bill Evans treatments. He also liked the 1944 movie noting that it’s ''a film noir'' and says when asked that his wife fine singer Tessa Souter hasn't covered the song describing it as a 'Mona Lisa' of a creation in a great turn of phrase.

Drummond as well as touring extensively with Sonny Rollins also played with Horace Silver, another of the many world famous leaders who made jazz the incredible music we all know it to be. He says working with Horace was a ''dream came true but one I never dreamt of doing at the time''. He loved 1957's The Stylings of Silver growing up. ''Horace Silver'' was certainly top in my opinion'' he says and he loves Miles Davis. ''Milestones IS a jazz record'' he emphasises with some easy authority and definitiveness. When asked about ''jazz drums'' as I put it clumsily he cites Milford Graves, Dave Weckl and Kenny Washington and points out how differently that they all play this thing called jazz.

Billy plays at venues in New York such as Mezzrow regularly. These days the New York clubs all have house drums he says but that wasn't the case in the past. He keeps his own kit at home and just brings in cymbals, sticks and a snare drum. He hasn't the ''patience or energy'' to go through the whole hassle of parking in New York and loading in.

Towards wrapping up a 40-minute very stimulating chat returning to mention of Carla Bley he says working with her was ''one of the great experiences in my life''. He speaks admiringly of bass guitar great Steve Swallow, Carla's partner and regular bandmate, who he loves to death because he helped him through a different period in his own life being there as a friend no matter that he is some 25 years older. As for Carla he says the iconic composer ''went the distance and made a lot of sacrifices in her career - everything was for the music.'' SG

Valse Sinistre is out via Cellar Live on 5 August. Look out for a review on marlbank at release time. Billy Drummond, photo: Roberto Cifarelli

Luminous Enrico Pieranunzi composition 'Fellini's Waltz' that has a vivacious, dancing quality to it in this immaculate rendering is streaming ahead of the release of guitarist Chris Allard and pianist Ross Stanley's album Tortugas out in July. The … 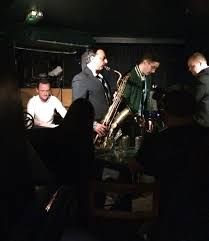 Ross Stanley above left at Kansas Smitty's in Hackney with Alex Garnett in 2016. Photo: marlbank