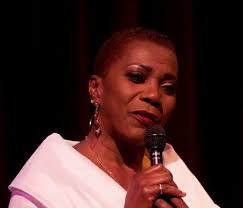 Carmen Lundy is inspired again and then some on new studio album Modern Ancestors. Containing self-penned and arranged tracks and a Carmen musician cast of Julius Rodriguez on piano, brother...

Carmen Lundy is inspired again and then some on new studio album Modern Ancestors.

Containing self-penned and arranged tracks and a Carmen musician cast of Julius Rodriguez on piano, brother Curtis Lundy on acoustic upright bass, Kenny Davis on both electric and acoustic bass, Mayra Casales on percussion, Terreon Gully alternating with Kassa Overall on drums, and Andrew Renfroe on guitar – the album was recorded at Stagg Street Studios in Los Angeles.

Speaking from Los Angeles beginning the conversation in earnest she takes me swiftly along to Stagg Street. It was ‘‘unique’’ she says, down the line faraway across the Atlantic but as immediate as if she was there talking in the room. She had gone to the studio for ‘‘tracking with musicians’’ having pre-recorded and pre-produced to get very much ready.

‘‘When you walk in you feel that you are in a sort of the tunnel.’’

She references the integrity of the place that brings to mind, like Capitol Records in other words: ‘‘Studios that hark back prior to the electronic music era.’’

Carmen had already in the past worked at Stagg Street located in northern Los Angeles in the San Fernando Valley on her album Code Noir that was released three years ago.

The engineer she tells me is Don Murray, whose stellar career has included a lot of jazz, and credits on Elton John’s The Thom Bell Sessions and Whitney Houston’s My Love is Your Love, and whose choices were she says ‘‘organic and very natural’’. Carmen left the choice of microphones up to Don, and they used Neumann 1949 and 1987 models. Her insights on the songs switch on a light.

The track certainly by contrast has a busy what’s going on set-up, we are in the middle of something, atmosphere. Carmen says that she did not want it to possess a typical ‘‘brushes’’ feel and so she had overdubbed guitar, piano, Rhodes, and other parts, and then Terreon Gully added his groove. She says that Tank, as he is often known by jazz fans the world over for his Dennis Chambers quality chops, got what she wanted straight away. ‘‘He embraced it. We found ourselves unified.’’

Pick your jaw up off the floor, spoiler alert, for one of the Modern Ancestors songs in the early part of the album speaking of the one and only clearly gospel-inspired title, the wonderful ‘Burden Down Burden Down’. Carmen mentions that her publicist Alisse Kingsley was present during tracking and was excited to invoke Sister Rosetta in response to what she had just heard.

‘‘I stood there and froze’’ at the thought, Carmen says, and explains that Alisse ‘‘had picked up the energy of the time, the embodiment and spirit of it all. It was so deep.’’

The daughter and granddaughter of as she describes “deeply religious” forebears ‘‘who built the church we all went to in Miami,’’ her mother Oveida was the lead singer in a Floridian gospel group known as the Apostolic Singers.

‘‘As a black woman something that is so profoundly constant that you just want a time for peace just get past the skin game, get down to brass tacks.’’

There is a strong latinate dimension to tracks such as ‘Ola De Calor’ a ‘Heatwave’ Ella Fitzgerald referencing thing going on. Carmen says she wanted to avoid doing the song which is in Spanish and English as salsa. Ella, however, is a singer that Carmen mentions as a totem, benchmark of all jazz singers along with Sarah Vaughan and also Betty Carter and like Carter Carmen has an independent business spirit and releases her own music via her own label and has done for most of her career, occasionally signing to other labels such as Justin Time and JVC albeit for brief spells only. She almost chuckles quite deadpan about herself as a woman of a certain age having her own ‘‘personal heatwave’’ as Havana in the song is having.

There is much variety and a serious side to the album most of all expressed on ‘Flowers and Candles’ when Carmen was very moved by the terrible events in 2015 that occurred at the Bataclan in Paris when three heavily armed gunmen murdered 90 people at the popular music venue and critically injured many others on what was a dreadful November night. She says she was coming back from somewhere in Europe when she heard about the attack reading the Washington Post and was moved by images of a father laying out flowers and candles.

‘‘People laid flowers and candles to express their sorrow for the innocent lives lost, and to consider the lasting impact these incidents have on our children I wanted to approach this song with an orchestrated expansive feeling.’’

By complete contrast and changing the sombre tone is a mood shift to the fun ‘Jazz on TV’ where she delivers a neat line in irony in the way her vocal goes up the scale against the comping part of the process and how she wryly casts an eye on the flickering screen stocked full of game shows, in her lyrics the song raises an easy smile.

More broadly she rails quite reasonably against the false sense of ownership that some record companies project and how they force artists to abandon their own inner muse and instincts to make compromises to fit some plan of their own.

Towards the end of a half hour chat I ask her about her painting. She paints in oils and water colours and says that she was inspired by ‘‘one Dutch and one Spanish’’ painter as it transpires moments later after the tease: ‘‘Van Gogh and Picasso’’

On the album cover you will see a painting of hers and I spot some other objects in the graphic collage that include a banjo, shelves, an African mask, love lettering, a photo, Carmen on a red sofa (from her home, she explains) and that saxophonist behind her hard to make out? ‘‘That’s Charlie Parker.’’

Carmen glosses in a few general notes to the media about the songs and on ‘Meant for Each Other’ writes that the song “harkens back to the mid-eighties when I was just beginning to seriously consider singing original songs only. I, along with many other vocalists, songwriters and composers, was busy making gigs in and around New York City and performing our own tunes. I arranged this song based on changing harmony and chord progressions in the intro, while staying true to the original melody and lyric written by Julie Raynor and Marilyn Redfield Castilaw. Laid down with a soulful, timeless groove.”

Interestingly in the improvisation on ‘Eye of the Storm’ the melodic inspiration of John Coltrane and A Love Supreme rings out quite organically. Of the latinate material the samba on ‘Affair Brazil’ is possibly best of all, Carmen gets inside the bossa and draws the listener into that aura the song beginning as if it was going to go fleetingly into ‘I Thought About You’.

One of the world’s great jazz singers it is stirring to hear Carmen in such fine form on one of her best ever albums that anyone who loves jazz should choose to spend quality time with. While a seriously formidable club singer as anyone who has heard her will surely agree, she says that she would like to play more concert halls beyond clubs in spaces more than 20-30 metres from the bar. That fine London hall the Barbican would suit her well surely and who knows maybe someone will promote her there in the future and if so that will be a thrill for a future audience – being there.