Spread over two days held at the Project Arts Centre and the Ark in Temple Bar, Jazz Connective came to Dublin after Ljubljana, Łódź and Helsinki – with Birmingham, London and Lyon next up. Supported by the EU under the Creative Europe Project, …

Spread over two days held at the Project Arts Centre and the Ark in Temple Bar, Jazz Connective came to Dublin after Ljubljana, Łódź and Helsinki – with Birmingham, London and Lyon next up. 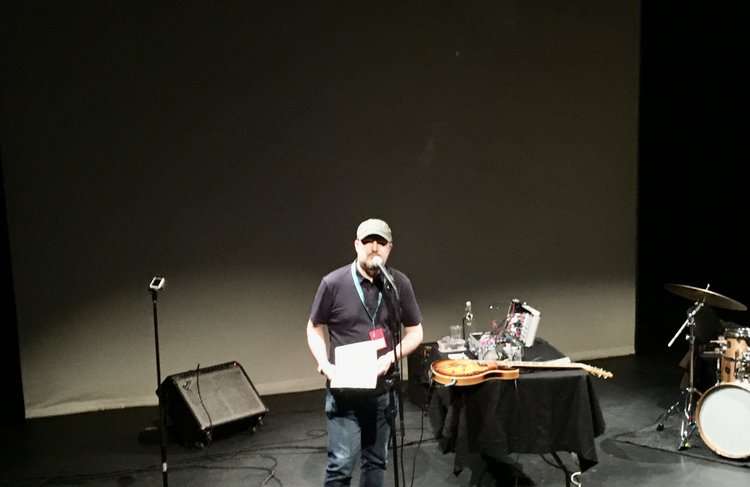 Supported by the EU under the Creative Europe Project, these two days of events encompassed workshops, a round table discussion moderated by Cormac Larkin of The Irish Times, and a programme of concerts programmed and produced by the Improvised Music Company (IMC).

The opening Space Is the Place workshop after an introduction by Kenneth Killeen of the IMC drew on Finnish and Polish experiences. Annamaija Saarela, curator and chief executive officer of G Livelab Tampere, described her beautiful looking new musicians union-owned venue and its vision for the future, while Martyna Markowska of the Katowice Institute of Culture touched on an overview of the Polish jazz scene and a discussion ensued among the delegates that drew on a range of shared experiences across Europe.

Later in the first of the live music performances drummer Steve Davis and guitarist Shane Latimer performed a late-afternoon freely improvised set that drew on Davis' interests in multi-directional drumming while Latimer injected a universe of electronics generated from a bulging box of wires and hooked up to a tiny keyboard that created a futuristic sound that spanned improv and electronica as the interplay between the duo developed in a relatively short length of time.

The evening triple bill began with the duo of pianist Izumi Kimura and violinist Cora Venus Lunny that was almost classical in its discipline and mood, Kimura very detailed and exact no matter how abstract the improvisations became.

Later hearing Laura Jurd play solo trumpet was a first for any Dublin audience and she showed her ability to vary her improvising points of departure whether using foot generated effects or utilising cup or harmon-type mutes.

Finnish power trio Mopo distilled energy in a livewire feat of derring do with Linda Fredriksson on baritone and alto saxes in particular injecting a flurry of detonations skilfully shaped by Eero Tikkanen who switched from bass guitar to double bass and back again as the set developed and the trio's collective energy fizzed and sparked their own motion.

The creating and developing jazz for young audiences workshop on the second day was led off by Eva Frost, director of JazzDanmark, who spoke of the Danish JazzCamp for Girls, and also featured Aisling O’Gorman of the Ark Children’s Cultural Centre in Dublin where the workshop was held who spoke of the Ark's 25-year history and collaborations there that have included past work with the IMC.

Later at the Project Arts Centre the children's orientated improvised project String Play was a fun piece of inventiveness featuring Mary and Katherine Barnecutt on strings and Matthew Jacobson on drums. The kids in the audience were very enthusiastic listeners and at times participants as they stomped their feet and leaned forward to get a closer look at the performers who merged theatricality with improvisation in a very organic manner.

At the round table open discussion led off again at the Project by contributions from a panel featuring Matt Jacobson, Annamaija Saarela, Eva Frost and Martyna Markowska questions from the floor were asked often revolving around issues concerning the fractured Irish jazz scene and the lack of a unifying focus or hub.

A range of observations arose from the floor. Musicians who spoke included Linley Hamilton, Barry Donohue, Tommy Halferty and Chris Guilfoyle while festival organisers who contributed included Dorothy and George Jacob of the Bray Jazz Festival and John Daly of the Limerick Jazz Festival.

The triple bill in the evening began with a solo piano series of free improvisations from Elliot Galvin that proved the easy highlight of the whole two-day affair, Galvin using prepared piano ideas to achieve striking outcomes and his improv (all pieces not on the new record he noted a tad impishly) spanning huge detail and power in its execution was state-of-the-art piano avant garde.

Steve Davis and Shane Latimer returned this time to play collaboratively in trio mode with Mopo saxophonist Linda Fredriksson and this worked best in the duo episodes between Davis and Fredriksson, the latter's power and incredible technique turning up the drama and heat of the performance an extra notch with its punky intensity and in the moment ideas.

Bex Burch's Vula Viel were the final act of the live performance segment of Jazz Connective in Dublin, Tom Herbert of The Invisible on bass guitar appearing on this occasion in the band instead of Ruth Goller. Jim Hart on drums was a dazzling presence and Burch showed great strength and power as she explored her inventive improvisational and compositional ideas on the unusual gyil.

A time of year when many overviews appear. As the jazz scene is so huge and international can one overview succeed in even scratching the surface? Rolling Stone is typical of many US publications to cast their gaze when it comes to jazz mainly to …

A time of year when many overviews appear. As the jazz scene is so huge and international can one overview succeed in even scratching the surface?

Rolling Stone is typical of many US publications to cast their gaze when it comes to jazz mainly to the US scene first and foremost, understandable in one sense given that the venerable magazine is a US title although at the same time pretty myopic in this regard to say the least.

The underlying belief seems however inadvertently arrived at to be that the best jazz comes out of the US which is of course absurd, not to disparage the great US jazz released all the time.

However, in recent years look at how influential the UK scene has become and that is only one example because among other scenes the vibrant Norwegian and German scenes are clearly punching above their weight and again this is not news at all although it may be by a process of complacency if major magazines only rely on the marketing and publicity messages emanating from the major labels and the big US jazz indies.

Is the US scene as relevant as it once was? A better way of putting it is that the US scene in terms of mythology and history may not be as vital as it once was. In what they call Best Jazz of 2019: A Listener's Guide the comment is that 2019 is a year of jazz ''continuing to explode'' which is really not explained or that meaningful. ''Explode'' properly would mean identifiable innovation in a revolutionary sense which is not the case at all in 2019 and certainly not happening all the time.

The idea that there isn't one ''dominant trend'' seems however more to the point. Is jazz even capable of revolution along the lines of the free-jazz movement in the 1960s any more? Perhaps, although not in any obvious way from the vantage point of where the music is going in 2019.

Compared to the dominance of AfroFuturism in recent years that trend for one as a charismatic driver has been less pronounced this year although its ripples are still felt. On the UK scene Afrobeat influences seem stronger than ever coming from the dance floor and the enthusiasm of millennials than the sci-fi mysticism of the main AfroFuturists. And we ought not to forget how grime is feeding in (perhaps more a localised UK factor) while innovators such as Robert Glasper continue to funnel more into the R&B/hip-hop/jazz fusion domain, an area he has been immersed in for many years, and continues to explore however tangentially for some.

The choice of albums in the Rolling Stone piece begins with the maverick Angel Bat Dawid who I think many critics are now seeing as a stand in for a Sun Ra of our times on one level, choice of instrument notwithstanding. Maybe the name of Tony Scott as a clarinet maverick back in the day is also worth pondering as we look for precedents if any! Rolling Stone zones in on one of the big talking point surrounding The Oracle and seems impressed by the fact that the album was recorded on an iPhone something that ''only heightened its intoxicating appeal.'' She is a one-off for sure but maybe will become pigeonholed as eccentric only although her compositional ideas are really interesting and The Oracle is a great achievement.

Saxophonist Matana Roberts is picking up a lot of acclaim and it's apt that Hank Shteamer who wrote the article has zoned in on her. Again Rolling Stone is absolutely correct to choose the latest from Terri Lyne Carrington which is probably the most significant socio-political statement in jazz of the year. However, other choices seem oblique, more a patchwork although to return to the initial point of there not being any dominant trend that seems fair enough. Perhaps 2019 is a year we will look back on when narratives so often clouded usher in a period of transition towards consolidation just around the corner. Let’s see.

''Hybrid styles'' referring to David Torn, Tim Berne, and Ches Smith means not very much and again the Rolling Stone overview seems to be one of searching not only for a narrative but a vocabulary to do justice to the often bewildering range of new jazz out there not that Torn, Berne and Smith are brand new artists, far from it, but as improvisers what they are developing is very novel.

We are in a jazz world where adjectives are not at all useful any longer and yet what can we rely on to make sense of what we are hearing? Certainly ranking or generating best-ofs is one solution but you need to know more about the critic in terms of their tastes and starting points to make any sense of their choices. Usually their credo is not obvious and we as readers can only discern their tastes by becoming as familiar with their writings as we are of the music of John Coltrane or Miles Davis.

While the article makes some well observed points and when Shteamer writes of Branford Marsalis' best album in years the article comes alive because what he is saying seems to generate most heat and heart in the writing. On The Secret Between the Shadow and the Soul nicely described as ''a thing of gnarled beauty, the sound of world-class virtuosity wielded in service of unguarded pathos, that must be heard to be believed’’ the article resorts to a championing imperative. A listener's guide? No. Guiding anyone towards complete clarity over the 2019 jazz scene is probably an impossible task. SG