From May 2015. Piano trios sometimes arrive on a wave of curiosity and acclaim, a word of mouth created somewhere else first. This was definitely the case with Swiss trio Vein, the piano player and drummer Arbenz brothers Michael and Florian joined … 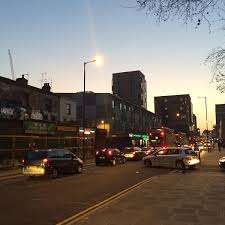 From May 2015. Piano trios sometimes arrive on a wave of curiosity and acclaim, a word of mouth created somewhere else first. This was definitely the case with Swiss trio Vein, the piano player and drummer Arbenz brothers Michael and Florian joined by bassist Thomas Lähns still very much unknown in the UK when they released Vote for Vein last year.

What’s their secret? Well that’s hard to say on a first listen live. But above all they gel as a unit driven by the amazing pianism of the baseball cap-wearing Michael Arbenz. Liebman was on superb form and highlights for me included ‘Negative Space’ and when the NEA Jazz Master switched at one point from wooden recorder deliberately overblowing and squalling at the top of its register to step down to mould to the key of the soprano saxophone it was one of those moments that lifted the music into new areas folding an ancient Eastern mysticism into a modern jazz setting. Tonally magnificent particularly on tenor saxophone there was plenty of energy in the two sets emanating both from Liebman and the trio.

Of the original new album material ‘Black Tortoise’ an easy highlight was definitely the pick here too and towards the end of the evening the flat cap-wearing Florian Arbenz came out of his shell a little more and this was good to witness as more space was clawed back by him at the kit. An abiding overall impression was the sheer athleticism and joy in Michael Arbenz’s vaulting sense of abandonand his punchy left hand vamps did much to hold the big turn-out at the Vortex rapt for long spells. SG

Dalston at dusk, above, photo: marlbank

First published in July 2012. When Carmen Lundy returned to the capital and Ronnie Scott’s with her trio launching brand new album Changes few people took note. It’s the lot of many a jazz singer these days, even one as creative as Lundy (even Betty …

First published in July 2012. When Carmen Lundy returned to the capital and Ronnie Scott’s with her trio launching brand new album Changes few people took note. It’s the lot of many a jazz singer these days, even one as creative as Lundy (even Betty Carter suffered in her day).

Announcing the names of her trio like a boxing announcer might introduce the main event – so it was “Anthony Wonsey from Chicago, Illinois”, as a taster, Lundy was on suitably athletic form in the company of star pianist Wonsey (Roy Hargrove, Nnenna Freelon) who also switched to keyboards; Philly bassist Darryl Hall on both acoustic bass and later electric; and introducing young Floridian Jamison Ross on drums, a real find with a big recessed beat that made me think of Terreon “Tank” Gulley.

Appearing from behind the dressing room door to the left of the stage, Lundy with her bare shoulders draped in a fur with her fingers and arms covered by long crimson gloves, the singer soon controlled the stage with a dizzying array of gestures, gesticulations and knowing looks.

Half Betty Carter, half Grace Jones as she shoulder danced along to the trio, opening with her simmering Maya Angelou referencing ‘I Know Why The Caged Bird Sings’ frequently grimacing as she scanned the decent sized Monday first set crowd, picking out the middle distance with her extended right hand. With her cropped hair, youthfully slim appearance, and riotous sense of abandon, she showed both her power and ideas on mostly original material new and longstanding.

Launching Changes, her twelfth album ahead of its US launch, Lundy was also content to reprise earlier material including the tour de force ‘You’re Not In Love’ which allowed her to reach out to long time fans and reminisce about Hoxton’s Bass Clef the club former Lennie Tristano bassist Peter Ind used to run. There were a few scenesters from that time in the audience as someone in the audience chatted back to Lundy as she recalled the jazz club scene of the time, and even Gilles Peterson could be seen emerging from backstage.

Best in the first set was the political ‘Love Thy Neighbor’ from the new album, a civil rights anthem all the more fitting as it was delivered on the evening of the Martin Luther King federal holiday in the States. Hall immediately drew you in on electric bass with a groove straight out of Gil Scott-Heron’s ‘The Bottle’ period, a sound that makes you shut up and wait for the message of social toleration and respect in the lyrics.

By complete contrast and resuming the London theme ‘A Nightingale Sang In Berkeley Square’ was sweetly delivered later, and remarkably for a singer who can sing down to her baritone depths her variety is such that the different registers introduce a different characterful persona each time, again reminiscent of the much missed Carter.

Changing costume for her second set appearance during the break, gone were the fur and the gloves, instead Lundy had donned a black dress with a white formal cut away jacket and a stiff collar. There was a bit too much schmaltz towards the end, and the well worn ‘New Year’ song I could take or leave, but the more sensual second set songs added yet another dimension to this strong showing with ‘(I Dream) In Living Colour’ another highlight. SG