A must for Kenny Wheeler fans: as Wheeler compositions for Chris Laurence are to be released for the first time

This autumn sees the first release on the EP Some Gnu Ones (Jazz in Britain) of Kenny Wheeler compositions the 3-movement 'Piece for Double Bass and Low Strings' and 'Baroque Piece' written specifically for the bassist Chris Laurence. The title … 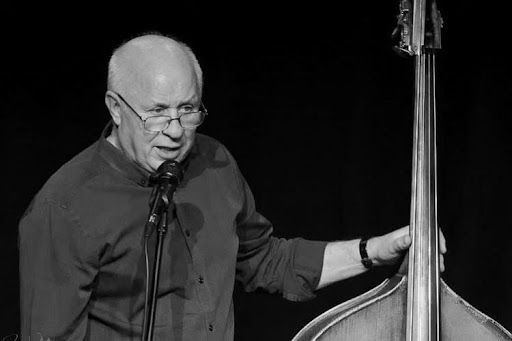 This autumn sees the first release on the EP Some Gnu Ones (Jazz in Britain) of Kenny Wheeler compositions the 3-movement 'Piece for Double Bass and Low Strings' and 'Baroque Piece' written specifically for the bassist Chris Laurence. The title immediately draws to mind the deliciously punning Wheeler classic album from 1976, Gnu High.

Virtuoso bassist Laurence, one of the UK's greatest jazz bassists, and also known for his work in a rock setting with Pink Floyd's David Gilmour, appeared on Wheeler albums Kayak, Dream Sequence, Songs for Quintet, Six for Six and The Long Waiting. A treatment of Kayak piece 'C Man' is also included on the upcoming EP.

The arranger and educator Pete Churchill, whose work with Wheeler on Mirrors in 2013 was hugely and quite rightly acclaimed, in the notes to be found on the Jazz in Britain label's Bandcamp pages writes: ''When Chris Laurence sent me a short score of a piece Kenny had written especially for him, and asked me if I could make sense of it with a view to getting it recorded, I jumped at the chance. The original hand-written score consisted of two complete movements and then the beginnings of a final section that seemed to tail off almost as though Ken had been interrupted. Thankfully he had returned to the score at some point and left us half a page of sketches for the last movement. So I set about the task of completing this piece for Chris keenly aware of the responsibility.''

Recorded between 2020 and 2021 in Harpenden and Wood Green the second movement of 'Piece for Double Bass and Low Strings' (with vibist Frank Ricotti and drummer Martin France among the personnel with Laurence) is streaming ahead of the Some Gnu Ones November release.

Fine free-jazz trumpeter Loz Speyer explains on his Spherical Records Bandcamp page the background to Open Territory that the label is releasing in December. Ahead of its release there is an excellent 30-minute plus track that represents the title …

Fine free-jazz trumpeter Loz Speyer explains on his Spherical Records Bandcamp page the background to Open Territory that the label is releasing in December. Ahead of its release there is an excellent 30-minute plus track that represents the title track streaming on Bandcamp and which was recorded in 2009. Loz takes us back to the period of recording. He says: ''Between February 2009 and December 2011 this free trio met and played round at my house a fair number of times. We never played a gig but we recorded everything, which amounted to about nine hours of music. This year I sat down and listened to all of it for the first time!''

Sadly the drummer on the record, Tony Marsh, died in 2012. Known mainly as a free improviser performing with among other luminaries Evan Parker however a year after his death there was a fine reissue of a very different stylistic time in his career with the release of jazz blues rock pub band Major Surgery's The First Cut that served as a testament to another aspect of Marsh's music-making earlier in his life. Open Territory certainly piques interest in his free-jazz recordings with this unknown seam now surfacing and is certainly worth getting.

On the track Loz injects a Bobby Bradford-like personality to the sound and I suppose Marsh isn't a million miles away in style to Ed Blackwell, another Ornettian and free-jazz pioneer, especially on the more bustling sections. In terms of later players he also corresponds with how Jeff Williams sounds playing freer. Devon-born bassist Olly Blanchflower reminds me of another Olie, Olie Brice, stylistically and there is great chemistry between all three players, the switching of emphasis and momentum criss-crossing between trumpet and drums steered admirably by Blanchflower's elastic beat.

Loz comments on the Bandcamp page description for the release: ''For a trumpeter, playing in a trio of trumpet, bass and drums can be both ideal and 'the ultimate challenge'! Ideal for the freedom it gives, there's loads of space to really hear everyone to the full, the elements of music are all there pared down to essentials, and you can really interact. It's a line-up I keep returning to, sometimes with compositions framing the improv, even standards – always the key is that open sound.''