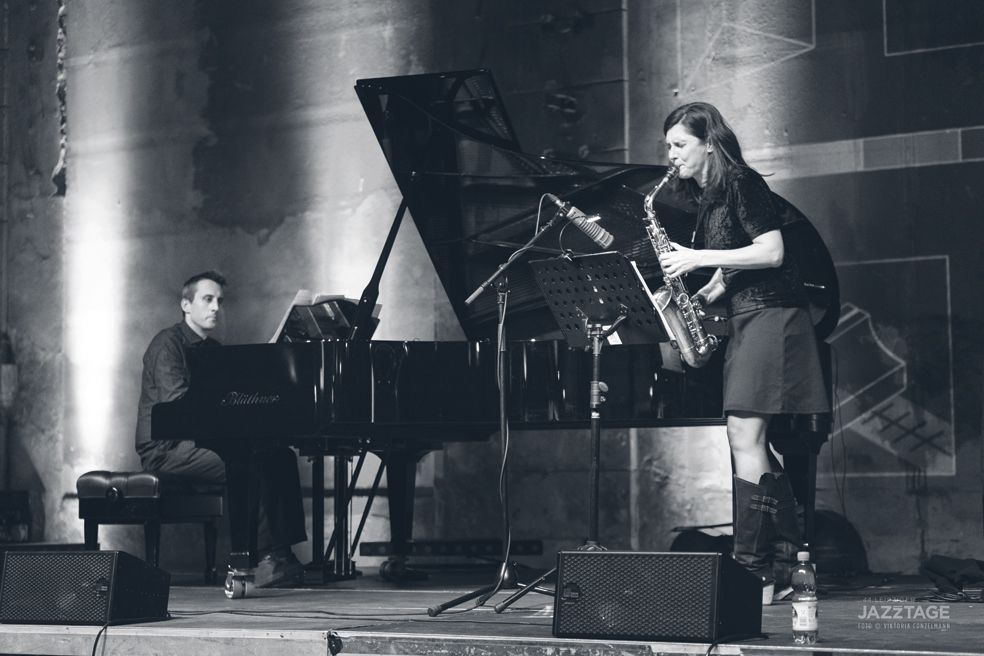 Interesting and stimulating how differently Muhal Richard Abrams' 'Arhythm Songy' sounds in a new duo treatment by German alto saxophonist Angelika Niescier and English pianist Alexander Hawkins on their album Soul in Plain Sight coming up for release by Intakt on 20 August. The Abrams composition appeared on the 1978-released Black Saint album 1-OQA+19.

There are several differences, the major one is that in the 1978 version as well as Muhal's teeming piano lines and two saxes (Henry Threadgill and Anthony Braxton) there's also bass and drums (played by Leonard Jones and Steve McCall respectively). And Niescier and Hawkins' version is substantially briefer. Recorded at the Loft in Cologne the tempo of their improvisation that eventually leads into the piece is taken strikingly slowly at first. Niescier's saxophone sound is quite pure and almost flute-like while the duo warily explore way beyond what we expect having listened to the 1970s vintage recording. Hawkins, the UK's Vijay Iyer perhaps certainly for his allied overt intellectualism and explorations deep into the language of free-jazz and fast becoming one of the UK avant scene's biggest draws at both home and exported across the continent of Europe, dismantles the piece leaving only a kernel as raw material and only really in the last minute is the main spiky theme discernible. All in all it is a complete renovation of the piece with its own validity, Certainly it's in keeping with the spirit of the piece yet radically transformed, even re-composed. Niescier is also excellent in this meeting of minds that demonstrates a lot of imagination.

It is seven years since the release of Riverside, the wonderful Chet Doxas-Dave Douglas record that got the essence of Jimmy Giuffre to the very marrow. Retro fiend Doxas is formidable too on new Mark Twain tribute 'Twelve foot blues' that has an …

It is seven years since the release of Riverside, the wonderful Chet Doxas-Dave Douglas record that got the essence of Jimmy Giuffre to the very marrow. Retro fiend Doxas is formidable too on new Mark Twain tribute 'Twelve foot blues' that has an airy, dancing, quality to its feel in this all-star setting that finds the saxist with pianist Ethan Iverson and double bassist Thomas Morgan drawn from Whirlwind release You Can't Take It With You. Might the widely adored Iverson who knocked us out most recently with 'Tempus Fugit' have considered instead a banjo bearing in mind the amusing outlandishness of Twain writing in the San Francisco Dramatic Chronicle in 1865 who advised ''When you want genuine music […] just smash your piano, and invoke the glory-beaming banjo!'' A studio recording, the only plucking going on is courtesy of tone poet Morgan, this was produced by Doxas and recorded in a New York studio approaching two years ago. What we know so far, in terms of lure and urge to hear more, have a listen, is ridiculously hard to resist.