Dim the lights and close the door: Alex Webb on his new normal

Jazz pianist and songwriter Alex Webb on his ‘‘new normal’’ during lockdown. Does King Lear help? ‘‘I can’t be the only one who has a cosy vision of a pub get-together or a dinner party, ‘when this is all over’, a vision of being with friends …

Jazz pianist and songwriter Alex Webb on his ‘‘new normal’’ during lockdown. Does King Lear help?

‘‘I can’t be the only one who has a cosy vision of a pub get-together or a dinner party, ‘when this is all over’, a vision of being with friends again, of comparing stories and trying to understand what it all means. When we all get through this, there will be as many versions of the lockdown as there are survivors. Scrub that – we know already that many of us won’t get through this. And if we do, it’s a fair bet that stories about being a struggling musician won’t be in high demand when front line workers have been sacrificing their lives for others.

‘‘But music itself – and the arts, and literature, and everything in the life of the mind that we suddenly have time for – these things do matter, perhaps more than ever. In this crisis, if I may borrow the words of Karl Marx from a rather different context, ‘man is at last compelled to face with sober senses, his real conditions of life, and his relations with his kind.’

‘‘And it kind of crept up on us. Simon Cooke of Ronnie Scott’s won’t mind me pointing out that when we chatted over a beer at the club on 4th March he was dismissing the virus scare as hype; a couple of weeks later we were all unwilling participants in a science fiction film. And all my work as a musician, months of painfully hustled gigs, had vanished, including two album tours – for my recent collaboration with David McAlmont The Last Bohemians and the new release from Tony Kofi’s Cannonball Adderley project, Another Kind of Soul. I’ll be honest, that hurts.

‘Man is at last compelled to face with sober senses, his real conditions of life, and his relations with his kind’

From The Communist Manifesto (1848) by Karl Marx and Friedrich Engels

‘‘So what do you do? You worry about family and friends, of course, you watch every news broadcast and you try to do the right thing. Then, speaking for myself now, it dawned on me that if I could survive financially (fortunately I was still owed some money for past teaching) a huge opportunity had opened up – all that piano practice, music theory, arranging and writing that I never had time for – maybe I could start actually doing it! 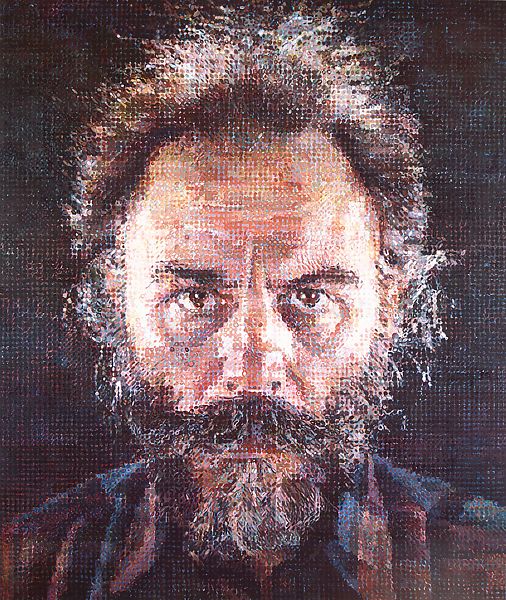 ‘Lucas 1’ by Chuck Close. Credit: The Metropolitan Museum of Art

‘‘Being an analogue sort of person I made a grid on paper for each week, so I could tick off physical exercise, piano practice, creative work every day – the empty squares would reproach me if I didn’t. The missus and I agreed we wouldn’t drink alcohol until Thursday of each week (Wednesday can be a white knuckle ride) and we’d eat healthily. All well and good, but then you find yourself staring at music manuscript, or Sibelius software, or a piano keyboard, and thinking ‘what now?’

‘‘So I remembered the novelist’s trick – you write 300 or 500 words every day regardless. As the American painter Chuck Close said, ‘Inspiration is for amateurs; the rest of us just show up and get to work.’ [See: Inside the Painter's Studio, Joe Fig, Princeton Architectural Press, 2009, p. 42] One of my main jobs is songwriting, and like most songwriters I have exercise books filled with odd lines and half-realised ideas – so I dug them out and started trying to separate the wheat from the chaff. I remembered that in some of my projects there were mistakes in arrangements which had never been fixed, so that made another to-do list.

‘‘And I’ve had time to listen, and I’ve found myself drawn to bigger-scale, arranged works – classical symphonies, Ellington, Gil Evans, Mike Westbrook, Stan Tracey’s big band work. But there’s always room for solid life-affirming jazz too – Basie, Lester, Roy Eldridge, Ben Webster, Abdullah Ibrahim. Is it because music that comes out of suffering tends to be positive, or is that too simplistic? It’s always interested me that in the 20th century, when so much Western classical music (and art) seemed to be about confronting despair, this African-American artform was saying, ‘life is worth living’. We need that, now.

‘‘Thanks to Netflix I’m also catching up on some classic films; my reading’s definitely got heavier and I even made myself sit down and watch a DVD of King Lear, three hours of my life I won’t get back. It’s about an old man in terrible weather. Some gigs are coming in now, or at least coming back, rescheduled into the autumn and beyond. This is going to be a long haul, and I don’t know how long my self-discipline will hold. China Moses and I had a line in a co-write, ‘You break their hearts and when you’re through / the whisky bottle winks at you / and all the promises you made …’ I’m writing this on a Wednesday, and that whisky bottle’s definitely trying to catch my eye …’’

Here's the spectacular lead-off track from Connie Han's Iron Starlet. A 23-year-old pianist and composer with prodigious technique, Han shares some common ground with Christian Sands. On the upcoming record Han is with bassist Ivan Taylor and …

On the upcoming record Han is with bassist Ivan Taylor and drummer/producer Bill Wysaske, saxophonist Walter Smith III and the great trumpeter Jeremy Pelt who is quite the arsonist on this exciting lead-off track.

Han has been around a few years. I wasn't much taken by 2018's Crime Zone, but I'll be tuning in here when the record comes out. Han seems so much more convincing.

Iron Starlet includes Wysaske tune 'Nova' and his instrumental arrangement of Joe Chambers' 'Hello to the Wind'. Han originals include 'The Forsaken' in waltz time and in a Wyntonian tilt the Black Codes (From the Underground)-inspired 'Dark Chambers' are also on the album.