All leaders as Vortex director Oliver Weindling mentioned as he introduced the JT4 to the stage, saxophonist Jean Toussaint nonetheless was the headline draw, the famed former Jazz Messengers player who was in Art Blakey's classic band when Terence … 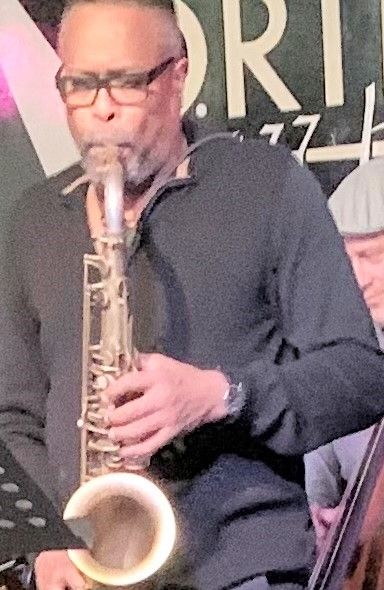 All leaders as Vortex director Oliver Weindling mentioned as he introduced the JT4 to the stage, saxophonist Jean Toussaint nonetheless was the headline draw, the famed former Jazz Messengers player who was in Art Blakey's classic band when Terence Blanchard was also a member in the 1980s and long-since a leading educator and professor at the Guildhall School of Music and Drama and formidable mentor both as a teacher and a player to generations of musicians at this top pioneering London music college for jazz. One of his former students pianist Andrew McCormack who he told us later as a 15-year-old student asked whether the combo at the time could play his piece 'Boris the Spider' (!) has been in Jean's band for years and also is well-known as an avantist with altoist Jason Yarde and the pianist of bassist Kyle Eastwood, son of jazz-loving Hollywood icon Clint.

The third leader Oliver referred to in his introduction was the Whirlwind label boss bassist Michael Janisch who was a busy, stimulating, presence during this second house performance and took a nimble solo towards the end. Completing the quartet and a little late to the stand for this second house was Shaney Forbes heard in great form on Wednesday at the Late, Late Show in Matt Roberts' quartet playing Prestige period Miles.

The drummer, who made his name with the Bobby Hutcherson and Eric Dolphy-loving Empirical again showed massive command of his instrument and made most of the running. Set highlights included Wayne Shorter's 'Palladium' made famous by Weather Report and Jean's composition a tribute to his late sister entitled 'Cry of the Unheard.'

McCormack's solo piano feature dedicated to Carl Jung 'Dream Catcher' worked well and there was plenty of lively rapport among the quartet on other pieces. Jean, tall, lightly bearded and dapper, wiping himself down stood by the pillar at the back of the stage on breaks after yet another full on work-out on tenor dazzled whether playing Joe Henderson-like passages or simply the blues which the band did with considerable aplomb on Bobby Timmons' 'Moanin' at the end. 'Meteor', Toussaint's piece based on the 'Solar' Miles Davis piece chord changes that the Messengers played in their repertoire, was another high point as was the unannounced gospelly-bluesy number delivered just before the encore ('For Eve' possibly is the title if I heard Janisch correctly later among the bustle of the Will Glaser and James Allsopp gig downstairs afterwards when I asked the bassist about the piece). It was great to see the Vortex pretty full for the JT4, one of the busiest nights so far since the events of March 2020 changed everything, to add that extra bit of atmosphere and willing encouragement which the quartet certainly seemed to respond to. Stephen Graham

Looking again and forward a lot to next month's Blue Note release Street of Dreams 'I'll Know' is a Frank Loesser standard from Guys and Dolls that you don't often hear so obviously these days performed certainly by less standards and Great American Songbook centred jazz trios than this one. The latest single to gravitate to ahead of the release and again like 'The Duke' makes its presence felt.

The last version of the song that I can find was two years ago and Wendell H Mills II's far more straightforward solo piano treatment. By contrast the Charlap trio's delicate elegance has an ease and mobility that keeps you listening. Going further back Cedar Walton's with Charlap's drummer Kenny Washington on 2001 High Note release The Promised Land had a different arrangement and was appealingly lively the melody led off by saxist Vincent Herring and joyful soloing from the much missed Walton injecting a lot of individuality to their treatment. The new Charlap treatment is slower, begun by the pianist more chordally and Washington's brush work with a different feel to the jollier swinging Walton sound again very listenable.