Playing Joe Harriott material in this tribute the Nu Civilisation Orchestra led from the piano, conducted and musically directed by the elegant Peter Edwards this was one set with 'Formation', 'Modal and 'Straight Lines' the first pieces. Tap … 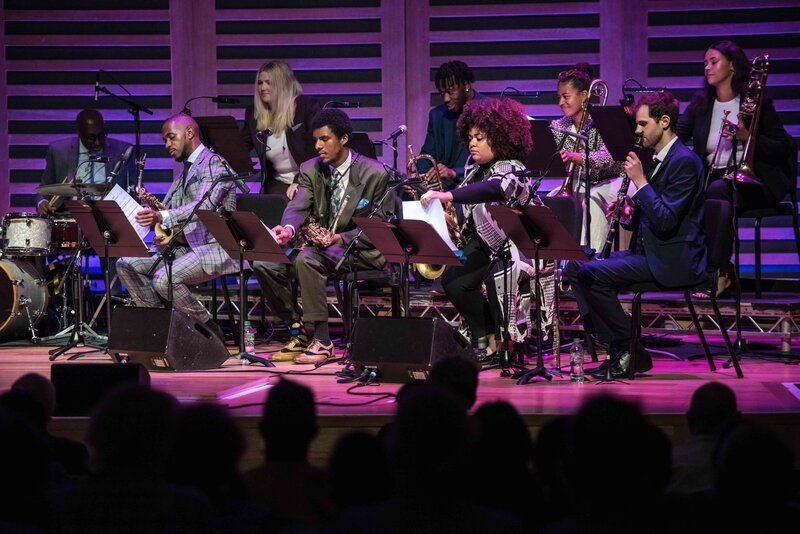 Playing Joe Harriott material in this tribute the Nu Civilisation Orchestra led from the piano, conducted and musically directed by the elegant Peter Edwards this was one set with 'Formation', 'Modal and 'Straight Lines' the first pieces. Tap dancer Annette Walker came on as a surprise guest.

The band was an 11-piece plus visuals projected in Hall 1 of the King's Cross, London, concert hall at the back over head from Catarina Rodrigues who was, as Edwards told us, ''part of the band''. Of the instrumentalists notable contributions came above all else in the Harriott role from one of the UK's greatest altoists Empirical's Nathaniel Facey who was simply superb, probably as good as I've ever heard him and he always sets the bar very high. In one free improv bit for instance when the band went very free he was quoting from Ornette Coleman and his soloing was generally scalding, intense and very gripping throughout. Harriott was one of the first free-players to adopt the language of Ornette although arriving with his own conception of abstraction independently in the 1960s by moving the sound on from the revolutions of Charlie Parker and adding an occasional Caribbean flavour. 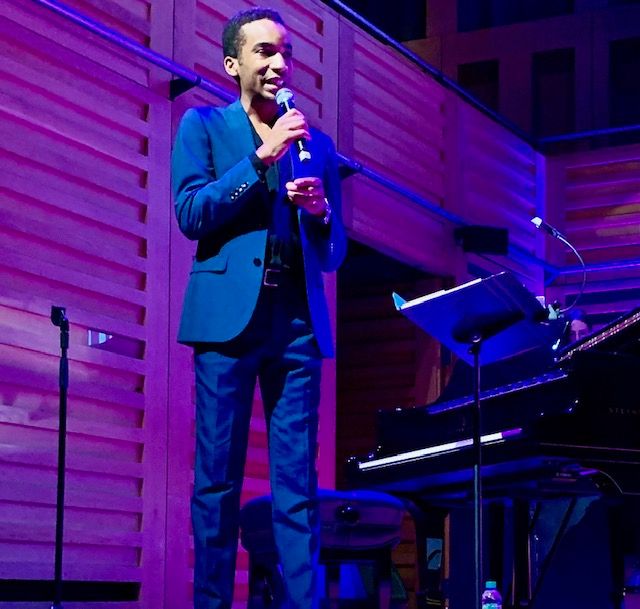 On tenor saxophone Xhosa Cole had less to do but when he broke free the contrast was graphic given his very different timbre and sense of timing. Scottish trombonist Anoushka Nanguy was excellent coming through more in the arrangements as the concert developed and Will Gibson on flute and clarinet, but particularly flute, had a lot to do and the way the arrangement gave contrasts between flute and baritone sax (played by Chelsea Carmichael who added some fine lines to the sax section voicings) was an astute piece of judgement by Edwards in shaping the Harriott body of work.

Crisply conducted by Edwards, above, Harriott's music has a lot of complexity and still sounds ahead of its time all these years on. The skill here was to make it communicate and give the players room to roam beyond the charts. 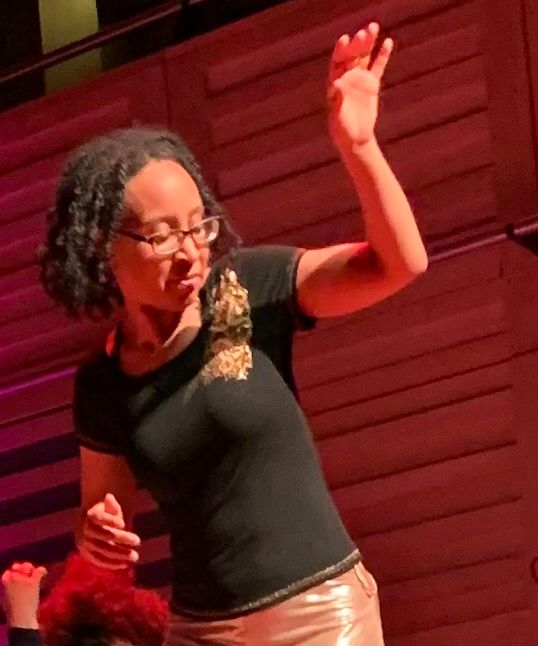 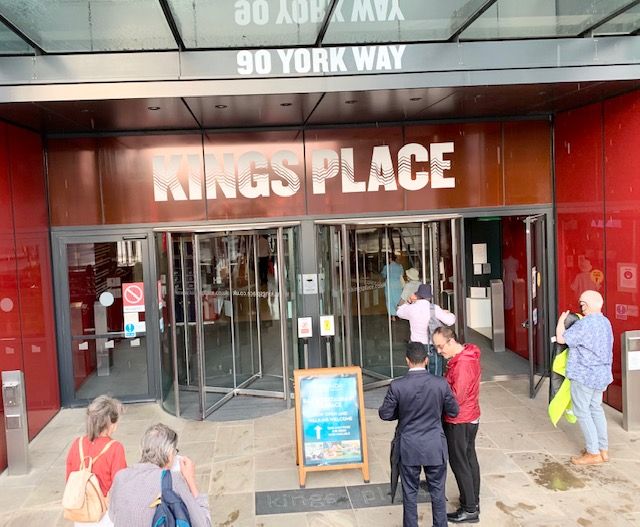 Youngs gave the band a lot of oomph and this was a fine performance by the Jazz Jamaica player. 'Idioms' came off very well towards the end with Harriott's 'Calypso' the perfect way to end. SG

A jazz singer, a jazz pianist. Think The Tony Bennett/Bill Evans album from the mid-1970s for one classic take on the intimacy of the format. Emma Smith, best known for her tenure in the Puppini Sisters, combines the sassiness of a natural born … 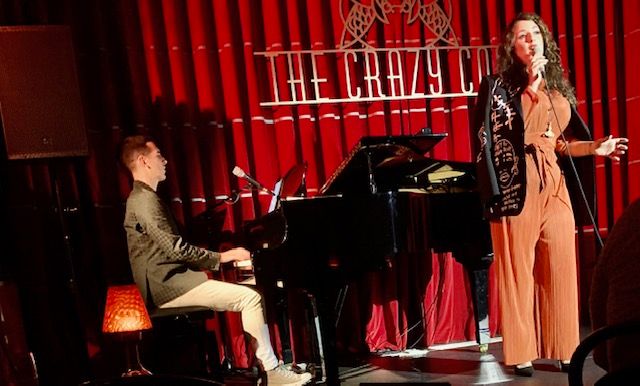 A jazz singer, a jazz pianist. Think The Tony Bennett/Bill Evans album from the mid-1970s for one classic take on the intimacy of the format. Emma Smith, best known for her tenure in the Puppini Sisters, combines the sassiness of a natural born entertainer with the sheer dexterity of a vocal improviser evident most when she scatted spectacularly.

Safir, who had fine album What's New out last year with Ian Shaw (sitting in the audience as it happened) and Iain Ballamy, has a superb ear and a poetic touch. On some numbers delivered here on an excellent piano in the plush Soho basement surroundings of cabaret and jazz club Crazy Coqs he turned the tables so I ended up watching the Mancunian's hands and savouring the chord changes too many times to mention.

Beginning with the Cy Coleman-Dorothy Fields classic 'Where Am I Going' from Sweet Charity closer to Barbra Streisand's sound than Dusty Springfield's or Dionne Warwick's version of the song Smith has a very communicative method unafraid to act out the songs and there was strong rapport with Safir as they took turns to talk to the audience but above all musically. The trombone-tattooed Smith described the songs in the set as a ''patchwork'' referring to the audience as fellow ''Soholians''. She joked about her Shirley MacLaine look and during the performance went rogue (rouge?) diva for a few minutes leaving the stage to consult with her ''make-up artist'' in case her face had fallen off in the heat. Champagne was also medicinally provided by a waiter silent as a lamb slipping the flute on to the stage.

The Gershwins' 'But Not For Me' was an early highlight and the ultimate statement was a bravura treatment of Irving Berlin's 'There's No Business Like Show Business' channelling Ethel Merman. Surprises included a very fine version of George Michael's 'Faith' and later Annie Lennox number 'Sweet Dreams (Are Made of This)' was another 1980s element.

Safir early in the set said that he was ''positively elated'' to be on stage and his passion showed. His best contribution was his part on 'My Funny Valentine' and on magical Joni Mitchell song 'A Case of You' the inclusion of which was dedicated to a friend of Smith's who has just given birth to a little Joni of her own. 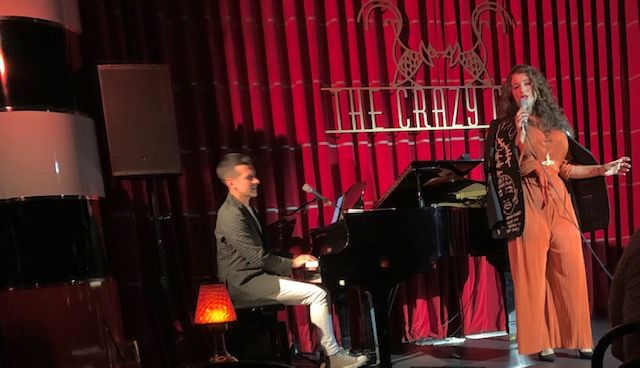 The overly perky intro to Cole Porter's 'Ev'ry Time We Say Goodbye' was the only passage of the show that I didn't think quite worked. However, the heart of Smith's vocal itself makes me think of Cheryl Bentyne doing the song more than Peggy Mann although hey go back to Benny Goodman any day of the week. Yes Smith's voice is that good. Intros aside Safir and Smith's witty 'Monogamy Blues' and their fine version of the Jerome J. Leshay/Bobby Troup song known for its Julie London association 'Nice Girls Don't Stay for Breakfast' was far more how do you do. Pass the jam.