Looking ahead to 2022: Andrew Cyrille, William Parker and Enrico Rava set the free-jazz agenda with 2 Blues for Cecil

Free-jazz fans take note because early listens to 2 Blues For Cecil suggest that this trio record from three icons of the avant-garde, the Italian trumpeter/flugelhornist Enrico Rava and Americans double bassist William Parker and drummer Andrew …

Free-jazz fans take note because early listens to 2 Blues For Cecil suggest that this trio record from three icons of the avant-garde, the Italian trumpeter/flugelhornist Enrico Rava and Americans double bassist William Parker and drummer Andrew Cyrille, will consummately set the agenda for the beginning of 2022.

All three played with Cecil Taylor named in the title of this TUM label homage recorded in a Paris studio over two days back in February. 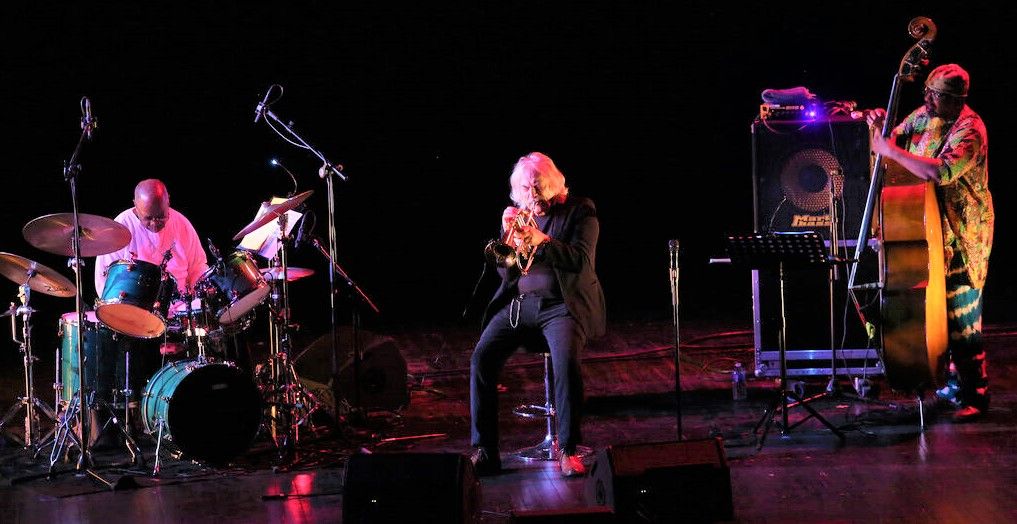 Tracks are: 'Improvisation No. 1,' 'Ballerina,' 'Blues For Cecil No. 1,' 'Improvisation No.2,' 'Top, Bottom and What's in the Middle,' 'Blues For Cecil No. 2,' 'Enrava Melody,' 'Overboard,' 'Machu Picchu' and a version of the 1930s Richard Rodgers and Lorenz Hart classic 'My Funny Valentine' forever engraved on the hearts of jazz fans by Miles Davis on the trumpeter's 1965-released live album of the same name. The open, loose, poetically oblique Cyrille, Parker and Rava treatment of 'Valentine' is pretty staggering to be perfectly frank. Release date is 21 January. We'll bring you a full review nearing release time.

Notes from the jazz margins: impressions of the scene in 21

A new Scottish jazz strength spearheaded by Fergus McCreadie, Anoushka Nanguy, corto.alto and Georgia Cécile has been a significant highlight this year. And jazztronica, part of which involves the rise and rise of the next UK jazz superstar surely …

A new Scottish jazz strength spearheaded by Fergus McCreadie, Anoushka Nanguy, corto.alto and Georgia Cécile has been a significant highlight this year. And jazztronica, part of which involves the rise and rise of the next UK jazz superstar surely the extraordinary David Mrakpor, is beoming more coherent in its ideas mainly through the lead shown by his role in Blue Lab Beats. But it's a big multi-faceted and undeniably exciting area.

Vocals are making more of a comeback with retro soul and a deep interest in standards a key ingredient for instance in fine work from Lady Blackbird, Luca Manning and Jo Harrop.

There is a strong case for separating the Official Jazz and Blues chart into two because blues is a big area in itself and blunts the profile for both jazz and the blues by stapling both together when looking at sales.

The Spotify playlists are far more significant for jazz than the Apple lists this year it seems through regular use. Apple don't seem to update their lists as regularly. But playlists are quite dull fundamentally in the same way as compilations can be. It's still hard to beat the persuasiveness of an album review by a writer you invest time in instead as a tool for discovery of new music.

Is the tabloid press ready to embrace an ''obscure'' jazzer scooping the Mercury? I don't think so. Maybe that's why the judges never choose one. Live streaming was more important last year because of Lockdown. Its role this year is more of an add-on and underlines once again that live in-person jazz in front of an audience in the same room can't be replicated although the tech was a decent substitute when needed and welcomed by many who even in normal times have no local scene where they are based and so rely on it to keep in touch remotely.

Clubs remain the heartbeat of the scene and its best barometer, not concert halls because there are more defined communities in clubs and it's more personal and you also get a sense of the work in progress when it is fresh not when it has been commodified. Thankfully, only a small number of clubs disappeared as a result of Lockdown. But nonetheless it was a shame that Hideaway in south London ceased given the excellence of the venue.

Can you imagine the impact of a similar amount of promotion for jazz as allotted to Adele recently all over the media would have if this was devoted to a jazz artist? It's unthinkable that it could happen but would be transformative if it did. Can you imagine the thousands who would know about such and such a jazz artist for the first time because it's on and exposed, rather than as usual ignored?

Young jazz musicians need a lot of support and encouragement to help them on their way and in this the BBC could do more to offer broadcasts to the under-30s through a new scheme. And the business itself can do more. To help in practical terms when fees aren't going up booking agents should reduce their fees by a couple of percentage points for a year. In the funded sector admin costs should be shaved so money saved can be allotted to improve artist fees. If there's a choice between booking more acts or embarking on a big commission which hoovers up a lot of available cash the former is far more preferable in the current climate.