Speaking on the phone from St Albans earlier guitarist Luca Boscagin has a duo album with piano icon Jason Rebello later this year as previously reported in these pages. (See 'Conjuring a Rose for Emily). Luca kindly fleshed out a few more details …

Speaking on the phone from St Albans earlier guitarist Luca Boscagin has a duo album with piano icon Jason Rebello later this year as previously reported in these pages. (See 'Conjuring a Rose for Emily). Luca kindly fleshed out a few more details including fascinating word on Miss Tulip, Dire Straits drummer Pick Withers' dog who collars a tune named in her honour.

Ghost Light will be Luca's first on vinyl, and while a release date hasn't been confirmed so far suggests that September is likely for the vinyl edition with other formats dropping earlier.

No stranger to the Hampstead-based Babel label on which the album is to appear (Boscagin is on Emilia Mårtensson's Loredana) the guitarist has known Rebello for six years and reignites their fire and rapport.

The pair, going back, had toured in Luca's homeland of Italy and then reconnected last autumn to record in Jason's studio in Bath. Ex-Jeff Beck, a jazz star before firstly hooking up with Sting in the 1990s, Jason was produced at the beginning of his career by Wayne Shorter on A Clearer View. Tunnelling back there is a Shorter link retained in the JuJu piece 'Yes or No' on Ghost Light although so far marlbank has only caught a live online version of the Shorter (rendered, note, 'Yes and No') that the pair released earlier in the winter.

The more traditional Italian connection isn't forgotten on Ghost Light and is provided by 'Ma se ghe penso' favoured by Luca's wife and a song that has a firm Genoese resonance in representing the Signora's home city. Luca likes music that connects in a roots way with the people.

Back on the St Albans end of the phone Luca carves a route to his own rock roots because The Zombies emanate from there. The duo do a beautiful contrapuntal version of and justice to 'A Rose for Emily' among a solid strand of flowing Pink Floyd and Jeff Beck covers. Luca loves heritage rock including The Beatles, Led Zeppelin, Wishbone Ash and Deep Purple and has been known to even make a pilgrimage to the very pub where The Zombies first played to bathe in their aura. Quite an 'odessey' but who's the 'oracle'? Bubbling up it could well be a tune, and a special one at that, from bassist Tim Thornton and 'Passengers', a tremendous highlight of the album and serves up, given Thornton's well known prowess as a chef, a deserved pizza-the-action. 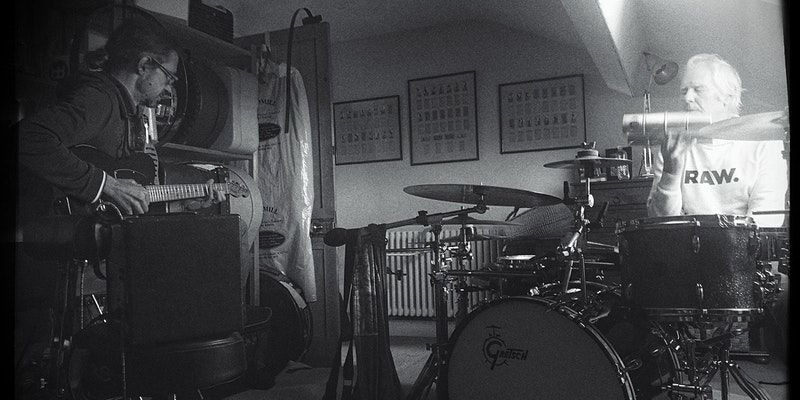 Luca, currently in the band of 'Sultans of Swing' Dire Straits drummer Pick Withers, as a writer builds melodies from riffs and as the album tracks convincingly demonstrate thrives on them as surely as we all very well will when the album rolls in. Not even a shaggy dog story I hear you mutter but Pick's dog does get her three minutes and forty six seconds worth of fame on 'Miss Tulip' in a touch of canine can-do. SG Luca Boscagin, top and above in Slim Pickin's with Pick Withers

Towards satori surrounded by serenity drawn from Hanamichi: The Final Studio Recording by Masabumi Kikuchi these sounds also usher in the remarkable Red Hook. Read an interview with producer Sun Chung.

Towards satori surrounded by serenity drawn from Hanamichi: The Final Studio Recording by Masabumi Kikuchi these sounds also usher in the remarkable Red Hook. Read an interview with producer Sun Chung.