Ron and ever on: Sarah Weller of Ronnie Scott's – back to the future

Sarah Weller, music programmer of Ronnie Scott's, the globally-renowned home of jazz at the heart of the London and national UK scene, looks back on a year like no other and forward to a brighter day only a few moonlit nights away 'If Ronnie was …

Sarah Weller, music programmer of Ronnie Scott's, the globally-renowned home of jazz at the heart of the London and national UK scene, looks back on a year like no other and forward to a brighter day only a few moonlit nights away

'If Ronnie was alive, I wonder what he would say of the last year? When we closed in March 2020, we put up a holding page on the website that had one of his jokes in it: “Actually you should have been here last week… somebody should have been here last week. We had the bouncers chucking them in.” Just remembering March now feels like a very long time ago… Reflecting on this year I’m sure Pete would have characteristically said, “Bollocks!”

'It’s the end of April 2021 and it has been a year of rescheduling, transferring tickets and offering credit notes and refunds. A year like no other at Ronnie’s in its 61 years. The highs of 2019 with the 60th anniversary gala concert at the Royal Albert Hall, the Street Party and the recreation of ‘The Old Place’ at Gerry’s soon felt like distant memories. The famous neon sign and stage went dark. The uncertainty of live gigs prevailed, and we became adept at moving hundreds of tickets with the wonderful support of our members and patrons. We knew that music would return, we just hadn’t anticipated how long it would take.

'We closed to live music and established the #lockdownsessions – band and workers only. Ashley Henry was the first artist to perform on 23 March 2020. With just one session under our belts, days later we were all furloughed! Returning three weeks later, I was part of a tiny team to keep the club functioning. Going into central London at the end of April was possibly the strangest time. The surreal feeling of walking through the empty streets; the same streets that would only now be returning to some of sort of normalcy a year on. Little did I know it would be the following April, where eating outside would be permitted and the streets of Soho would come alive again.

'It would be another four months before the livestreams took off again (this time calling them the #returnsessions, in the hope that we would). The darkest days were those that followed after the third closing in December, and we knew it would be a long time until we could open again. I will never forget looking out of my office window and seeing life-forces of Soho such as places like Bar Italia close, and the impenetrable silence in the streets. We knew that providing music was giving work to musicians, sound engineers, camera people, duty managers and during the time of the livestream, things seemed normal. More than normal: an enjoyable, 75 minutes of forgetting about everything negative that was going on and watching musicians return to the lifeblood of performing, that had been denied of them for so long.

'Returning once more to the #lockdownsessions we had more of an idea of how long we would be closed which enabled us to consider programming months of livestreams, in the way we would programme live music. At first, we kept them to two per week, until February this year when we decided that it had been a long time since Big Bands had been seen so Big Band Sunday was born. Craig Wild presented Maynard Ferguson and Alan Downey, Denny Ilett presented his Electric Lady Big Band, and the Pasadena Roof Orchestra celebrated Easter with us. 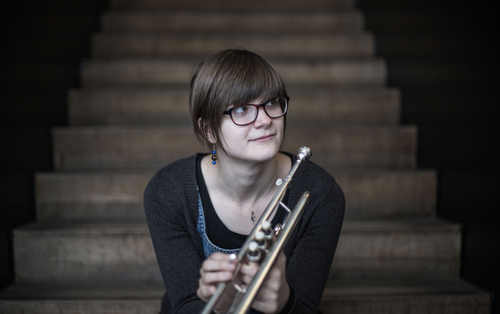 'Our last livestream, without an audience will be on 17 May with Laura Jurd’s Dinosaur before we finally open back up on the 20th with Reuben James. You have to be hopeful. I hope that the next time we will be closed will be Christmas day but ready to celebrate Boxing Day with Liane Carroll.'

Sarah Weller, top. Photo: Ronnie Scott's. Laura Jurd, above. Photo: via Jazz Connective. More on the resumption of live jazz and upcoming programming – is on the Ronnie Scott's website

Noise that's Joy-ful, Joy Brown in this case the singer here on Arthur Hamilton's 'Cry Me A River' one of the vocal track selections from the must-hear Dan Wilson record Vessels of Wood and Earth. Look at who's breezed in? As previously discussed …

Noise that's Joy-ful, Joy Brown in this case the singer here on Arthur Hamilton's 'Cry Me A River' one of the vocal track selections from the must-hear Dan Wilson record Vessels of Wood and Earth. Look at who's breezed in? As previously discussed in these pages 'Who Shot John' is another strong candidate among the tracks. Guitarist Wilson produced by Christian McBride for the Philadelphian jazz icon's own Brother Mister label album Vessels personnel include a range of leaders in their own right as you'll find pianist Christian Sands, bassist Marco Panascia, Jeff “Tain” Watts on drums and then the relative newcomer aforementioned guest Brown playing a significant part.

As for 'Cry Me A River' for the sheer oomph I'm going not to Julie London, much as I love that classic version, not to Ella, again ditto, or other versions but to the Dakota Staton treatment, the one on I Want a Country Man (Groove Merchant, 1973), also issued on Congratulations to Someone, Dakota quite wondrously with Manny Albam's big band. Brown's not the same kind of singer at all, but certainly goes for power in her own way and it works in the more intimate context with Wilson comping. Final word Dan dares to dream. Imagine hearing George Benson for the first time being actually there? Setting the tardis it is hard to ask for anything more. SG.